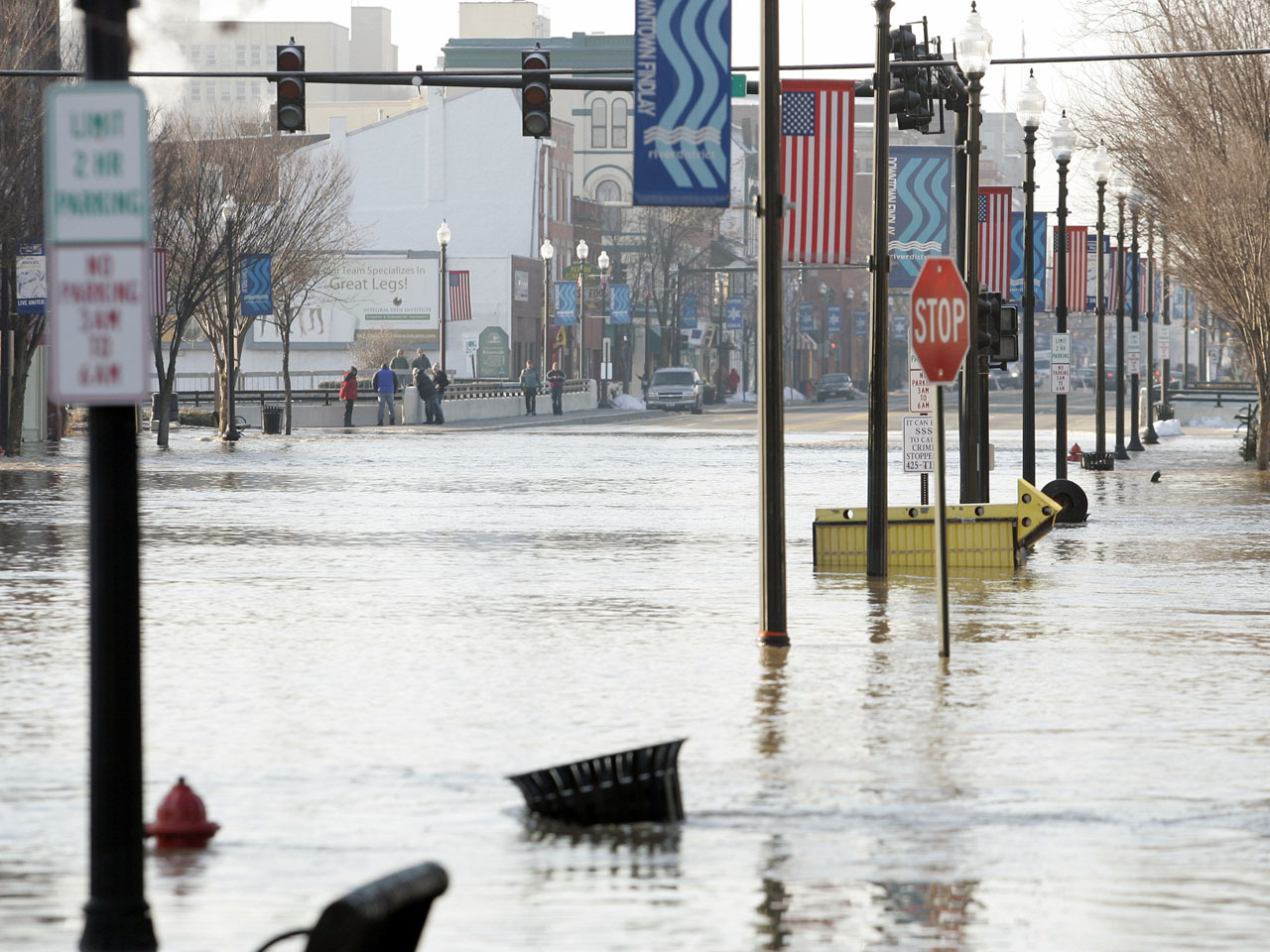 FINDLAY, Ohio - Residents of a flood-prone Ohio city brightened as the waters crested Tuesday, a day after wicked storms lashed the eastern half of the nation with heavy rain and tornadoes, killing at least four people.

The Blanchard River in Findlay topped out at less than 5 1/2 feet above flood level, city safety director Jim Barker said. That's about a foot lower than during a catastrophic flood four years ago that caused millions of dollars in damage.

The high water was mostly downtown and in a few residential neighborhoods in Findlay, 45 miles south of Toledo. The main street was under 3 feet of water Tuesday morning.

"This doesn't even shock you anymore," said Casey Hensley, manager of a Domino's Pizza store in Findlay. "It makes you mad, but it doesn't shock you."

A woman's body was pulled from her car Tuesday morning after it sank in a swollen tributary of the Huron River in Norwalk, Ohio. In Tennessee, three people were killed when high winds and rain wreaked havoc across the state Monday, uprooting trees and flooding roads.

In Ohio, the flooding divided Findlay in half, forcing Tuesday morning commuters to take long and slow detours to get around the water.

Downtown, a 4-foot wall of an estimated 1,000 sandbags kept floodwaters out of Hensley's pizza shop. During the record flood in 2007, water got into the building and damaged the oven, Domino's manager Casey Hensley said.

"The sad thing is we just got rid of the sandbags that we had kept from the last flood," he said, adding that new sandbags were trucked in Monday. He got in to work at 6 a.m. Tuesday through a back door that was still accessible and said the shop would be open and delivering pizzas.

A mix of melting snow and heavy rain threatened flooding in all 88 of Ohio's counties, the National Weather Service said. Flooding 4 feet deep destroyed a building at Cleveland's zoo and killed a peregrine falcon.

Findlay's residents know all too well what to do when faced with the threat of high waters.

Warren Krout lost just about everything inside his pawn shop when floodwaters swamped his store nearly four years ago. With the river rising again, he had help this time.

University of Findlay football players lugged mattresses, an air hockey table and reclining chairs to the second floor of Krout's store. "Stack it as tight as you possibly can," he told the young men.

What they couldn't carry was put up on concrete blocks or left to chance.

"Some of this stuff is just going to have to go down the river," Krout said Monday.

"We anticipate a flood every time it rains," Krout said.

In Tennessee, officials in White House, north of Nashville, told WSMV-TV that a public works employee died when he was washed into a drain pipe after pulling debris out of it to unclog it.

A 79-year-old man died in Franklin County, in the southern part of the state, when his mobile home was knocked off its foundation and he was pinned underneath. A woman was hurt and taken to a hospital.

"I don't know if it was a tornado or straight line wind, but whatever it was beat us up pretty good," Franklin County Sheriff's Sgt. Chris Guess said.

In Knoxville, heavy rain fell Monday morning and afternoon, flooding streets, basements and backyards. A man driving a truck was killed when he hit a tractor-trailer on a highway near Murfreesboro; authorities blamed wet roads.

Six people were treated at a hospital in Maryville, Ill., where storms tore off part of the roof at a church.

In New York, flooding from an ice-jammed creek forced about 200 people from their homes in a western New York hamlet where the waterway flows into Lake Erie.

Residents evacuated Monday as the Cattaraugus Creek flooded Sunset Bay, a cluster of seasonal and year-round homes in the town of Hanover, southwest of Buffalo.