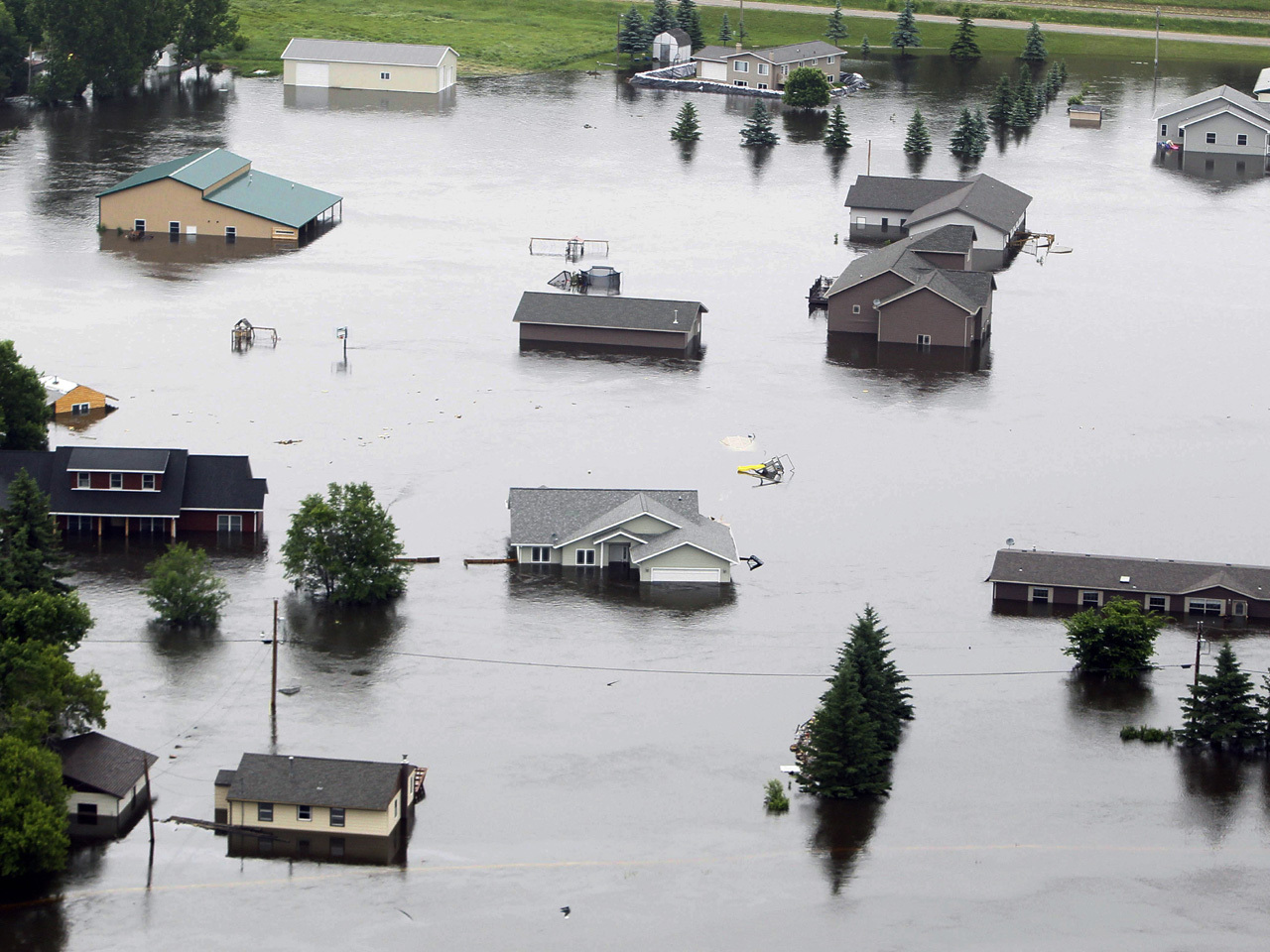 MINOT, N.D. — The Souris River neared its crest Saturday in Minot, where city officials hoped to ride out the high water without losing more than the thousands of homes already damaged by flooding.

The river had been expected to peak Saturday evening at some 8½ feet above major flood stage, but it appeared to be leveling off hours earlier as it approached 6½ feet over that mark.

Damage was already widespread, with Mayor Curt Zimbelman reporting more than 4,000 homes had been flooded in an evacuation zone of neighborhoods nearest the river. About 11,000 people were ordered out earlier this week.

"The fact that more homes aren't being engulfed or being touched by the water, that's the one silver lining if you can even say there is one," Dodds said.

Worse flooding to come in Minot, N.D.
Photos: Fighting against the Souris River

"It looks to me like, barring any rainfall ... the (flood-fighting) plan looks like it's holding up very well," he said.

City spokesman Dean Lenertz said updated estimates of the flood's toll were being prepared. The city's water, sewer and electric power systems were still working. Workers labored to keep the Broadway Bridge, a major north-south thoroughfare, from being overwhelmed, a possibility that would divide the city in half.

Zimbelman and others had fretted about rain in the forecast, but the National Weather Service said the storms didn't appear to be widespread or long-lasting.

Fed by heavy rains upstream and dam releases that have accelerated in recent days, the Souris surged past a 130-year-old record Friday and kept going.

Dalrymple spoke Saturday to flood evacuees at shelters at Minot State University's Dome, an indoor track and basketball arena, and at the City Auditorium. Thirty-seven people stayed at Minot State's shelter Friday night, and 237 people bedded down at the auditorium, the governor said.

The Minot State shelter was virtually deserted Saturday morning. One evacuee dozed among rows of cots lined up neatly on the dome's indoor track.

Dalrymple and his wife, Betsy, listened to Les and Jacque Younger, 30-year Minot residents whose home had been dry just a few days ago.

"We have about a foot, I think, to a foot and a half before (the flood water) goes to the second floor, and that's what I'm trying to save," Jacque Younger said. The couple, who had lived in their home four years, said they also lost a van to the water.

Dalrymple noted that although thousands had been displaced, relatively few were staying in shelters.

"It just seems like people are so well grounded here with, like, friends and family," Dalrymple said. "They're used to asking people to support each other, and they find places to go."

Minot State cancelled classes next week. President David Fuller, who was biking around campus to check on conditions, said classes wouldn't resume until after July 4 and only if the Broadway Bridge was open.

"Even then, we're going to have to reassess to see how that's going to impact the students' work in their classes," Fuller said.

The Federal Emergency Management Agency pledged assistance to flood victims in Burleigh and Ward counties, which include Minot and Bismarck, the state capital, which has been damaged by Missouri River flooding. Sens. Kent Conrad and John Hoeven and Rep. Rick Berg had pushed for the aid in a call to Homeland Security Secretary Janet Napolitano and said they hoped it would be extended to other flood-ravaged counties.

Hoeven said a helicopter flight over the Souris valley showed damage to smaller cities around Minot.

In nearby Burlington, more than half of the town's 1,000 residents left late this week to escape the Souris. In Velva, a small town about 20 miles downstream of Minot, emergency levees were being built in anticipation of an expected crest on Tuesday.

Sawyer, a town of about 350 people, was under a mandatory evacuation order Saturday after the Souris flowed over the main dike around daybreak. National Guard soldiers worked on a secondary levee. Mayor Cy Kotaska said about three homes had been flooded.

The National Guard activated 870 members for the crisis. Minot is best known as home to an Air Force base responsible for 150 Minuteman III missiles in underground launch silos scattered over 8,500 square miles in northwest North Dakota.

Col. S.L. Davis, commander of the 91st Missile Wing, said there was some "localized flooding" at a handful of missiles sites because of the wet spring and summer. But he said the silos are designed to safely handle some water and protective measures were taken at a few sites similar to what's done in preparation for spring runoff from snowmelt.