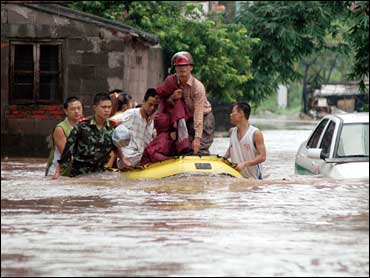 Floods caused by heavy rains over two days killed 26 people and injured another 14 in China's southwest, the government said Friday, as the death toll from flash floods in a nearby province rose to 21.

Floods swept through Guizhou, Yunnan and Sichuan provinces on Wednesday and Thursday as torrential rain poured onto the region — with worst-hit Sichuan receiving as much as 7 inches of rain, the official Xinhua News Agency said.

In Sichuan, 12 people died and two were missing in the floods, while landslides triggered by the downpour wrecked 1,400 houses, the report said. Nearly 3,000 people were evacuated, Xinhua said.

Another 14 people died from the floods in Guizhou and Yunnan, the report said.

The local government of Guizhou evacuated more than 2,400 people from Jiebi prefecture and Zunyi county, where some 4 to 6 inches of rain fell, the report said, citing the Provincial Headquarters for Flood Control and Drought Relief.

In Yunnan, another two people were missing and more than 300 homes destroyed after heavy rains pounded on Zhenxiong county, it said.

Meanwhile in nearby Hunan province, the death toll in flash floods last weekend has risen to 21, with another six people missing, Xinhua reported.

The floods swept through Lonhui county in Hunan province on Sunday after some 10 inches of rain fell and mudslides toppled at least 15 houses.

The death toll was originally put at 11 but grew as rescue workers found more bodies. Some 11 villagers were still hospitalized, Xinhua said.

Among the dead are Liu Qingdong, a 32-year-old village head who helped with evacuations, Xinhua said.

While the months of June through August mark the annual rainy season that sets off floods and landslides in China, storms this year arrived unusually early.

Almost 200 people have been killed and more than a million have been forced from their homes since late May.