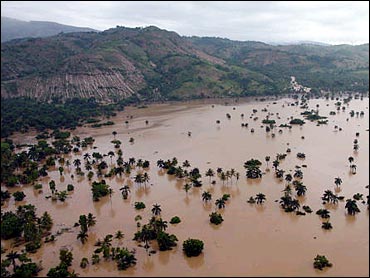 U.S. and Canadian troops rushed medical supplies, drinking water and chlorine tablets Thursday to flood-battered towns where bodies were floating near the tops of palm trees and thousands of marooned survivors were in desperate need of aid.

While the official death toll climbed to about 1,000 in Haiti and the Dominican Republic, the hundreds missing in both countries fed fears that the final toll could climb as high as 2,000 in the deadliest floods to hit the island of Hispaniola in recent memory.

Rains returned Thursday and fell steadily as U.S. Marines delivered drinking water and chlorine tablets to hundreds in the southern town of Mapou, where most houses were submerged under more than 10 feet of water.

As many as 1,000 were feared dead in Mapou, according to Margarette Martin, the government's representative the southeast province. Officials had counted about 300 bodies in the town, located 30 miles southeast of the capital of Port-au-Prince, said Dr. Yvon Lavissiere, the region's health director.

Mudslides had washed out roads, forcing aid workers and troops to fly in by helicopter. U.N. teams were trying to arrange boats to help recover bodies trapped under trees and in houses in Mapou.

If workers can't recover the corpses in time, aid agencies warned that could contaminate water sources.

"You can still see bodies in the water coming up," said Michel Matera, a U.N. technical adviser for disasters who traveled to Mapou on Thursday. "Palm trees are almost covered... There is a grave risk of an epidemic."

An estimated 10,000 people in 26 surrounding villages are in urgent need of help and essentially cut off by roads devoured mudslides, Matera said.

"We are still having difficulty reaching them even by helicopter," he said. "We cannot land because of the flooding, nor can we get there on foot."

The U.N. World Food Program planned to try to deliver eight tons of food to Mapou on Friday, if troops can provide helicopters.

"A few months ago we couldn't move because of security. Now we can't move because the roads are destroyed," said Guy Gavreau, a spokesman for the U.N. World Food Program.

For many Haitians, it was one more disaster to pile atop the troubles weighing down on the poorest country in the Americas. The U.S.-led force, brought in to help after the Feb. 29 ouster of President Jean-Bertrand Aristide, struggled to fill urgent needs while they prepared to hand over control to a U.N. force on Tuesday.

"The situation is serious because the town is submerged," said U.S. Marine Lt. Col. Dave Lapan, a spokesman for the U.S.-led force. "We're also fighting time because weather is turning bad again." Hurricane season, which marks the beginning of the rainy season, starts Tuesday.

Real estate salesman Sentheliare Veretnne, 45, said his family's small farm on the south coast was swept into the sea and others he knew were missing.

"I had no reaction because the country is already in crisis," he said. "We have no work, there's the political situation, everything. You can't react emotionally."

The Haitian government's official death toll climbed to 579 Thursday as some 165 people, including 45 children, were declared dead in the border town of Fond Verrettes. Few bodies were found there after floods swept away most houses.

At least 417 bodies have been recovered in the Dominican Republic, a number of them Haitian migrants who had crossed over to work as sugar cane cutters or market vendors.

Rains over the weekend lashed the island of Hispaniola, which Haiti shares with the Dominican Republic, unleashing floods that erased entire neighborhoods early Monday.

In the Haitian town of Fond Verrettes, U.N. officials brought plastic tarpaulins for shelter Thursday, while a team from France-based Doctors Without Borders treated villagers with injuries, and the World Food Program distributed 13 tons of food aid.

Dominican authorities buried more than 250 bodies after the floods struck early Monday, some in a mass grave. Officials said they plan to spray disinfectant by plane over the Dominican border town of Jimani to keep decomposing bodies from spreading disease.

One 18-year-old Haitian, Pepe Dematin, traveled across the border to Jimani searching for his brother's family of five. "I came to find them, but their house is gone," he said.

Bodies were carried away in torrents of mud; some were washed downstream into a crocodile-infested lake.

Red Cross workers are helping search for bodies, survey the damage and treat the wounded.

With more rain forecast and flooding possible, "there is the urgent need to move people away from some areas," Matera said.

Haiti has become a hazardous place for flooding and mudslides because its impoverished people constantly fell trees to make charcoal - a practice that has left the country almost entirely deforested. Without roots to hold back the soil, rains can bring disaster.

The floods are some of the deadliest in the region in recent years. In 1994, Tropical Storm Gordon caused mudslides that buried at least 829 Haitians. As many as 15,000 people are estimated to have died in 1999 flooding and mudslides in Venezuela.

Touring Jimani on Friday, Dominican President Hipolito Mejia promised homes for families who had lost them.

Interim Haitian President Boniface Alexandre has called for flags to be flown at half-staff Friday and said he would ask the government to free up 10 million gourdes (US$250,000) in aid. The government, however, has scant resources to deal with natural disasters.