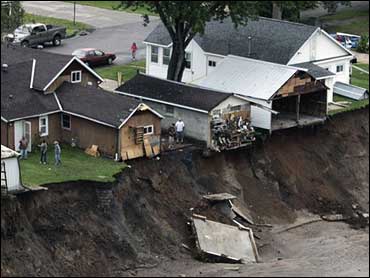 A powerful storm system that swamped the upper Midwest and killed at least six people moved into Ohio on Tuesday as weary Minnesota residents returned to their water-logged homes. For many, it was a surreal scene.

Orange Xs marked buildings that had been searched for survivors. Canoes lay in the streets. At a campground in Houston County, picnic tables hung from trees.

Mud several inches deep covered streets in parts of Rushford, and some sidewalks had collapsed.

"Some people had to cut holes in their roofs to get out, the water was so deep," said Jack O'Donnell, chief deputy with the Fillmore County Sheriff's Office.

The storm was one of two systems that flooded towns in the Midwest and southern Plains over the weekend. The second, the remnants of Tropical Storm Erin, killed six people in Oklahoma, eight in Texas and one in Missouri, where up to 11 inches of rain fell in a few hours Monday.

Overnight, the heavens unloaded on central Ohio, dumping so much rain — 8 inches in just a few hours — that communities were swamped with almost no warning, reports CBS News correspondent Cynthia Bowers.

So much water fell that a 7-mile stretch of I-75, one of the nation's busiest interstates, had to be shut down.

In the small town of Shelby, the Coast Guard had to be called in to airlift a trapped elderly man, adds Bowers. In Carey, 50 miles away, nearly the whole downtown was under water.

In Minnesota, divers and the crew of a National Guard helicopter searched for Jered Lorenz, 37, whose overturned car was found lodged in the rocks along a creek near Lewiston.

Fifteen miles to the south, the National Guard controlled access to the city of Rushford, escorting residents in just long enough for them to grab pets, clothing, medicine and other emergency supplies.

Rushford City administrator Windy Block said residents may be allowed back for good Tuesday if electrical power is restored and the storm sewer works. She estimated that at least a third of the town's 1,800 residents suffered damage from the flooding of Rush Creek.

Hundreds of people fled their homes in southwestern Wisconsin as the deluge turned the countryside in Vernon, Crawford and Richland counties into bogs, drowned crops and strained dams nearly to the breaking point. Damage estimates hit nearly $30 million and were expected to keep climbing.

Southwestern Wisconsin was under another flash flood watch Tuesday night and Wednesday, with a chance of rain through Friday, said National Weather Service meteorologist Rod Swerman.

The town of Soldiers Grove, Wis., lost part of a road to flooding. In nearby Gays Mills, flooding filled downtown with waist-deep, peanut butter-colored water. Mason Evans Jr. said water was 8 feet deep in his house in Gays Mills.

"It broke me," Evans said. "I lost everything."