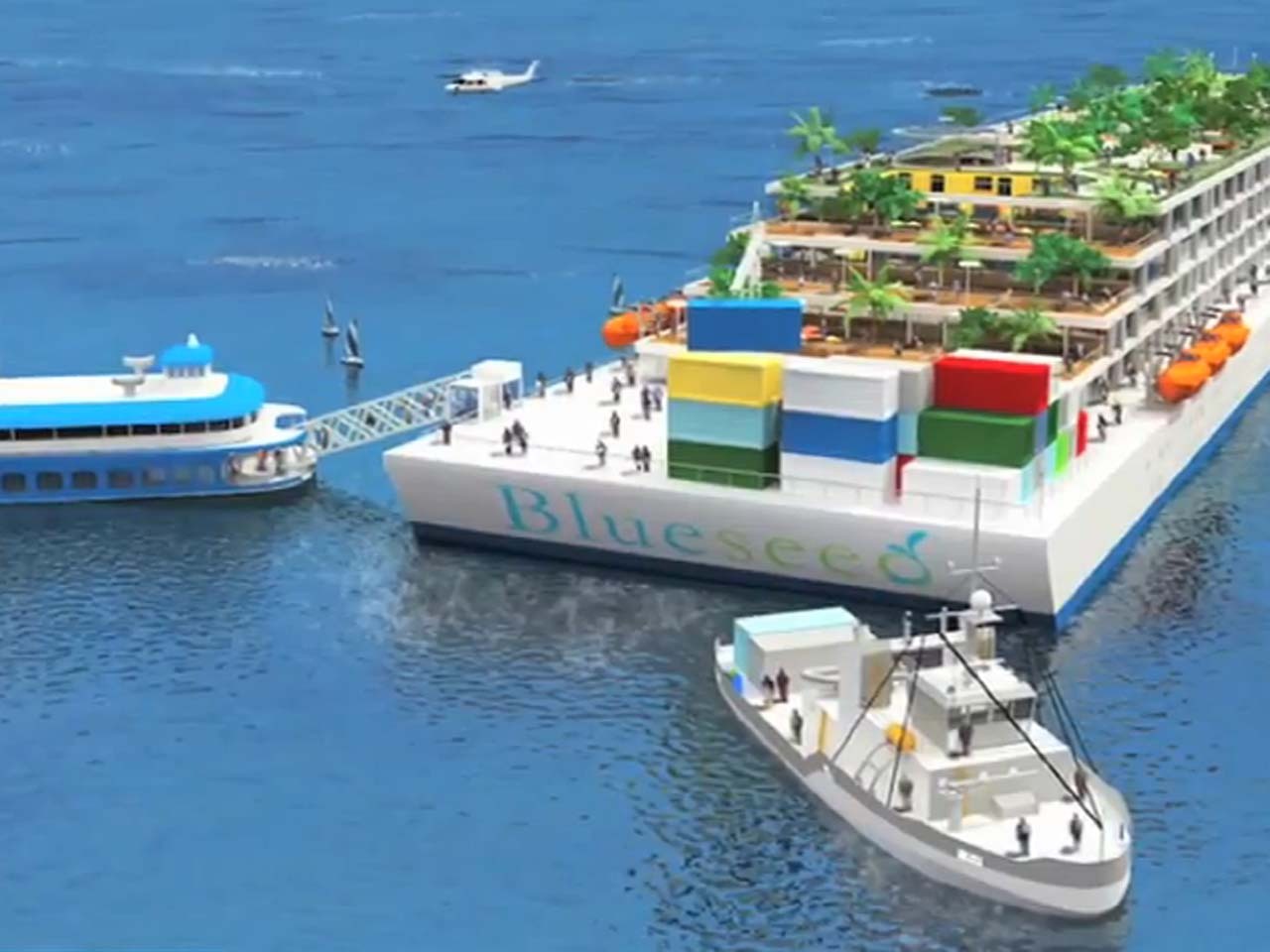 (CBS News) The tech world is always looking for the next great idea. And now two entrepreneurs have come up with a unique way for foreign workers with a dream to make it big in America by heading out to sea.

It's called Blueseed, a floating city and a vessel for new business talent. The idea might sound crazy at first, but the people behind it say, given the condition of our economy, and our immigration laws, it's also, necessary.

In the rolling waters off Half Moon Bay, Calif., many people see the ideal spot for a leisurely sail. But Dario Mutabdzija sees a tidal wave of new business in a not-so-typical office environment.

Once you get 12 nautical miles off the coast, you are no longer in U.S. territorial waters, but you're still an easy commute from Silicon Valley, the tech capital of the world. That's why Mutabdzija and his partner Max Marty think it's the perfect place to set up an international office on the high seas.

Mutabdzija and Marty's grand plan is to outfit and anchor a ship, where foreign entrepreneurs would live, rent a room, and pitch their ideas to businesspeople who visit from the shore.

It's something they believe is necessary because of the U.S.'s EB-5 or employment-based visa, which makes it almost impossibly expensive for outsiders to pursue the American dream.

Immigration lawyer Harlan York said, "The only way an immigrant entrepreneur can seek to live in the United States with a green card is to invest $1 million here. And, there's a limit annually of 10,000 of these applications. We've never even reached half of that number."

It is far easier for entrepreneurs to open a business almost anywhere else, including Britain, Canada, Singapore, and Chile. And while those restrictions are being loosened, America remains locked down.

For both Mutabdzija, whose parents fled the war-torn Yugoslavia in the mid-'90s, and Marty, whose parents left Fidel Castro's oppressive Cuba in the 1950s, the project is deeply personal.

"My own parents are - they're entrepreneurs. They run a small medical business in South Florida," Marty said. "It's a very clear example of growing up with people who came from a different country, came to the U.S., became Americans, and then created jobs, and improved the economy. I see it in a very real way. And it's something that I want to promote."

In response to the charge that their idea is an unrealistic, utopian fantasy, Marty said, "I think of this as a radical idea, but also a practical idea. It's using existing technology. It's using existing legal frameworks. It's trying not to bite off more than it can chew at once."

Mutabdzija said the precedents for the idea exist. He said a cruise line is one of the closest. Mutabdzija said, "We are taking this concept a couple steps further.

Mutabdzija and Marty are currently navigating the tricky waters of local, national and international law and politics, as well as raising money. The project will take $40 to $50 million.

What's in this for the men behind this. Well, they take a 6.5 percent stake in every company that comes on board, which means when the business succeeds, they do too.

So is this effort going to take away American jobs? The effort is to be positive for everyone involved. The businesses wouldn't be created if wasn't being done on the boat, and they'll be employing Americans after they open.

For more on this story, watch the video in the player above.