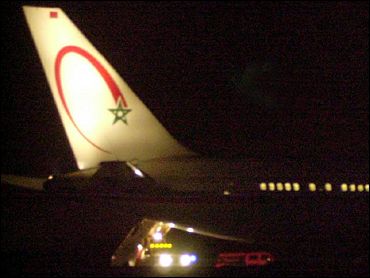 Law enforcement agents were questioning two passengers who were removed from a Moroccan-bound jetliner that was diverted to Bangor, officials said Friday.

The Royal Air Maroc flight, which had left New York's Kennedy International Airport Thursday evening, resumed its trip to Casablanca early Friday after it was refueled and the remaining passengers were rescreened.

The FBI continues to investigate the bizarre scare that had them scrambling in the middle of the night, reports CBS News correspondent Bob Orr.

One of those detained is a Chicago man, 27-year-old investment banker Zubiar Ali Ghias, who had been reported missing to Chicago police last Saturday.

The second passenger, whose name was not released, was sitting next to Ghias, Bangor police Sgt. James Owens said.

Police removed both from the flight and took them to the FBI's Bangor office, Owens said. Neither was under arrest, he said.

FBI spokeswoman Gail Marcinkiewicz said she knew only that Ghias was talking to federal agents but that it was possible other passengers were being questioned. "It would make sense that we would interview a number of people," she said, adding that Ghias was cooperating with the continuing investigation.

Flight 201 had 92 people aboard before it was diverted, landing in Bangor about four hours after it took off, Marcinkiewicz said.

It was not immediately clear why the plane was diverted.

Caruso said the pilot first told passengers that the Boeing 767 had mechanical troubles "so the passengers wouldn't get upset."

Bangor airport was notified 10 to 15 minutes before the plane landed, he said. "We got a call that there was an irate passenger on board, and also a bomb threat," he said.

A private investigator, Ernie Rizzo, told The Associated Press that Ghias called his wife from aboard the plane. Rizzo said Ghias had last been seen by his family on Saturday. He said he was hired to track Ghias to New York through his credit cards.

Rizzo quoted Ghias as telling his wife, "I'm on flight 201 to Morocco. I've been captured by al Qaeda, they want me to do something for them. I love you, I just gotta do this."

His wife called a television station, which in turn called the FBI.

Marcinkiewicz cited calls from Chicago-area media to an airline security desk in New York reporting a possible bomb. She declined to comment on Rizzo's statements.

Officials say no explosives were found and Ghias, in the end, presented no real threat. He had been flagged by security at JFK as he was leaving because he claimed no luggage for an overseas flight, Orr reports. That alone played a big role in deciding to turn the jet around.

Transportation Security Administration spokesman Mark Hatfield said the plane was redirected because of a bomb threat. He said the threat was apparently made by a passenger on the plane.

Holly Baker, a spokeswoman for the Federal Aviation Administration in New England, said she knew nothing about a bomb threat. Baker said the plane was diverted because "there was a person aboard who they felt was a security risk."

Passengers were rescreened and the plane was refueled before taking off shortly before 4 a.m., Marcinkiewicz said.