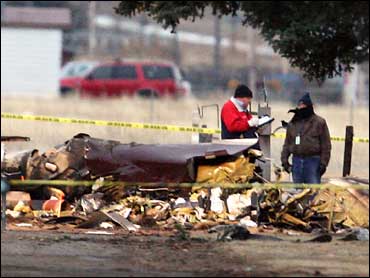 Half an hour before a small plane crashed in Montana, killing all 14 aboard, the pilot requested a change in course from Bozeman to Butte. Why remains a mystery.

Flying at 25,000 feet, pilot Buddy Summerfield requested the diversion shortly before the single-engine Pilatus PC-12 crashed at the edge of Butte's airport Sunday about 75 miles east of Bozeman.

Mark Rosenker, the acting chairman of the National Transportation Safety Board, said the request is at the forefront of the investigation.

"It begins with that question - the 25,000-foot diversion to go to Butte," Rosenker said.

Summerfield said nothing to controllers to indicate he was having trouble and offered no reason for changing course. A computer card that records trends in the engine system was recovered from the wreckage, but investigators cautioned that it's designed for maintenance purposes and could prove useless in determining a cause.

The probe will include a review of Summerfield's medical history, based on speculation that a heart attack or other health issue might have been at fault. Rosenker said air traffic controllers detected no strain in the 65-year-old pilot's voice during his final communications.

Rosenker also revealed that the plane's landing gear was down but its wing flaps were up at the time of the crash. That's unusual for a landing aircraft but not unheard of, said the investigator in charge of the accident, Dennis Hogenson.

Also under scrutiny are weather conditions that could have caused icing on the plane's wings and possible overloading. The plane was configured to seat just 10 people, but the fact that several of the 14 passengers were small children has dampened speculation that excess weight was a factor.

The investigation has been hampered by the lack of a cockpit voice recorder or data recorder, which were not required on the private flight. Rosenker said his agency may subpoena cell phone records of the victims to see if they could provide further clues.

While descending toward Butte's Bert Mooney Airport, the plane passed through a layer of air at about 1,500 feet that was conducive to icing because the temperature was below freezing and the air "had 100 percent relative humidity or was saturated," according to AccuWeather, a forecasting service in State College, Pa.

A possible stall created by ice - and the pilot's reaction to it - has been the focus of the Buffalo investigation, which remains open.

Keith Holloway, an NTSB spokesman, said it was too early to single out any one factor in the Butte crash.

Since 2001, federal authorities have investigated 15 crashes involving PC-12s. Six involved deaths, with a total of 14 people killed before Sunday's crash. Rosenker said his agency has yet to find a common thread that would link those accidents.

Two weeks ago, the Federal Aviation Administration issued a warning known as an "airworthiness directive" for PC-12s. The agency said cables used to lower and raise the plane's elevators could become stuck. The NTSB's Hogenson said that issue has been ruled out in Sunday's crash.