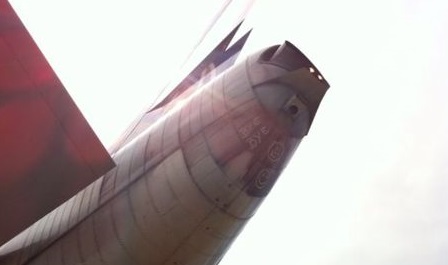 Thirteen flight attendants hope a lawsuit against United Airlines will get their jobs back. They were fired for refusing to fly after seeing an ominous note on the plane.

On July 14, 2014, Grace Lam and 12 other flight attendants, all of whom had been on the job at least 17 years, were preparing United Airlines Flight 869 when they learned graffiti had been discovered on the fuselage. The flight had been scheduled to fly from San Francisco to Hong Kong.

"She showed us the picture of the graffiti together with two faces that was taken on her phone. That's the first time I saw the graffiti," Lam said.

Two faces and the words "BYE BYE" were scrawled in oil along the tail section, nearly 30 feet off the ground.

"I was scared. I was frightened," Lam said. "I have flown as a flight attendant for total of 24 years, and I have never seen anything like this."

In the wake of the disappearance of Malaysia Airlines Flight 370 four months earlier, Lam and the crew said they perceived the message as a serious threat.

But according to the 26-page complaint, United Airlines refused to deplane Flight 869, and the ground crew inspected only the auxiliary power unit, or APU, near the drawings, and said it was a "joke."

The flight attendants refused to fly without a full security sweep, and the trip that was was canceled since United had no crew.

In October, the airline terminated all 13 flight attendants for "insubordination."

"I believe it's a moral mandate to do what they did, and that's to say, 'We're not going to fly on this flight,'" said David Marshall, the flight attendants' attorney.

"In the face of this kind of threat, an airline is required to actually deplane the passengers, get 'em off the plane and do a security sweep of the plane ... They didn't do that," Marshall said.

In a statement, United told CBS News, "Our flight operations, safety and maintenance teams appropriately investigated and determined there was no credible security threat. All of FAA's and United's own safety procedures were followed, including a comprehensive safety sweep prior to boarding, and the pilots, mechanics and safety leaders deemed the aircraft entirely safe to fly."

"I have no regrets at all," Lam said. "If this happens again today, all over again, I would have done the same thing. Any flight attendant would have done -- this is our job."

Grace and the other flight attendants are asking United to reinstate them. The plaintiffs are also seeking back pay and compensatory damages.