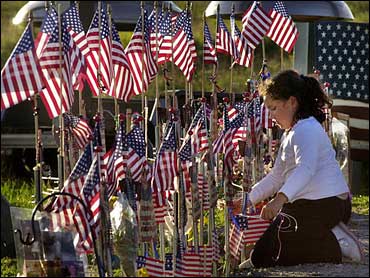 One design calls for a small chapel with 40 metallic wind chimes. Another features a "Bravery Wall" inscribed with the names of the dead. A third is more natural, with a meadow of herbs, grasses and wildflowers.

On Wednesday, one of five designs will be chosen as a permanent memorial to the 40 passengers and crew who died when Flight 93 crashed in a Pennsylvania field on Sept. 11, 2001. With names like "Disturbed Harmony" and "Crescent of Embrace," each design under consideration reflects a different approach.

"It's probably one of the most significant milestones in our effort to memorialize the heroism of the passengers and crew of Flight 93, in that there will be a precise focus and objective to be pursued," said Hamilton Peterson, president of the Families of Flight 93. His father and stepmother were killed in the crash.

A 15-member jury made up of family members, community members and design professionals was tasked with making a final recommendation on the design. The five finalists were selected from 1,011 designs originally submitted for the 2,000-acre site in Shanksville, Pa., where the plane crashed.

By unveiling the design in Washington, organizers hope to garner more publicity for their campaign to raise $30 million in private money for the project. The fundraising campaign is being co-chaired by former Pennsylvania Gov. Tom Ridge, who was the first Homeland Security Secretary, and retired Gen. Tommy Franks, who oversaw operations in Afghanistan and Iraq after the terrorist attacks.

The state of Pennsylvania has already donated more than $10 million for the memorial. A projected date for the opening has not been set.

Flight 93 was on its way to San Francisco from Newark, N.J., when it was hijacked and crashed about 65 miles southeast of Pittsburgh. The official Sept. 11 Commission report said the hijackers crashed the plane as passengers tried to take control of the cockpit.

Flight 93 was the only one of the four hijacked planes on Sept. 11 that did not take a life on the ground. The commission said the hijackers' destination may have been either the Capitol or the White House.

Since the crash, more than 130,000 people annually have visited a temporary memorial made of chain link fence at the crash site, and have left behind more than 20,000 items, such as baseball caps and American flags.

Some of the items will be used in exhibits, but others will be studied by researchers studying how people reacted to the terrorist attacks, said Barbara Black, curator of the Flight 93 National Memorial.

The design selected still must be approved by the director of the National Park Service and the Interior Secretary. The park service will administer the site.