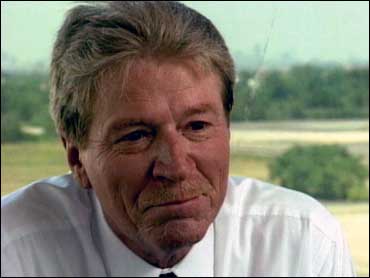 John Werth had been a flight controller for 31 years before the day al Qaeda terrorists hijacked four jetliners over America. One of those planes turned out to be under his watch. In his first television interview in five years, Werth recently spoke exclusively to CBS News about what he experienced that tragic day.

When Werth reported to work at the Cleveland Center at 6:00a.m. on September 11, 2001, it was still dark outside, but the sun rose to fill a clear blue sky. "It was a nice, late summer day. Not a cloud in the sky. Usually those are good days," Werth says.

From his perch in eastern Ohio, he would handle United Airlines Flight 93, a Boeing 757 heading west from Newark to San Francisco with 37 passengers and 7 crew members on board. Four of the ticketed first class passengers were on a suicide mission. The delayed flight took off at 8:42a.m.

In his career, Werth never had as much as a close call between planes in his airspace, what controllers call a "systems error." He'd never made the mistake of allowing two airborne jetliners come within five miles of each other. But Werth had handled emergency flights before and knew what to do. "You have to keep to your cool. I mean, you just have to stay steady so that they stay steady," he says. "Try to keep the pilot calm, for one thing, 'cause I'm sure he's panicked enough as it is."

Before September 11th, there hadn't been a hijacking of a U.S. airliner anywhere in 15 years. Airline crews were taught to accommodate the demands of hijackers – an ever rarer presence in American skies – land the plane safely, and let the military and the FBI handle the rest. If they had an opportunity, pilots could squawk the hijack code on the transponder. That would never happen with United 93.

Three minutes later, at 9:38a.m., Werth heard from his console speaker the garbled sounds of a struggle in the cockpit. He put on his headsets to hear better. Then, about 30-seconds later, came another startling transmission.

"It started to act erratically right after that," Werth says. The plane's altitude suddenly dropped 700 feet. "I told the immediate supervisor who was within earshot that 'I think we have another one.'"

During the next four minutes, Werth repeatedly radioed the cockpit, asking the pilot to confirm the hijacking, but got no response. At 9:32a.m, he heard a transmission intended for the passenger cabin uttered in heavily-accented English: "Here, the captain, please sit down and remain sitting. We have a bomb on board."

"United 93, understand you have a bomb on board. Go ahead," Werth said. The cockpit did not reply.

Werth watched the unresponsive plane climb to 41,000 feet and directed nearby traffic out of the way. He says, "I did what I could. I mean, I was not controlling United 93, I was controlling the other aircraft, and that was my intent – to keep them safe."

At 9:39a.m., Werth heard Lebanese pilot-hijacker Ziad Jarrah essentially repeat his announcement that there was a bomb on board and the plane was "going back to the airport" to meet the "demands."

But Flight 93 was not heading back to Newark. After making a U-turn near Cleveland, it was on a southeast collision course with Washington, D.C. The U.S. military had no idea.

"I would've liked to have just talked directly to the military myself and tell them where the guy is," Werth says. Though Jarrah had turned the transponder off, Werth tracked the flight using primary radar and sightings from other planes. "I thought that the military had enough firepower and enough time to, you know, assuming we knew where he was and could lead them to him, that he would eventually be intercepted."

The 9-11 Commission would conclude our homeland defense was "improvised" that day, as communication between the pillars of our aviation security, the civilian Federal Aviation Administration and the military's North American Regional Aerospace Command, or NORAD, was chaotic and ineffective.

"Within three or four minutes, probably, of when it happened, I asked if the military was advised yet. Had anybody called the military?" Werth says. "They said, 'don't worry. That's been taken care of,' which I think to them, meant they had called the command center in Washington."

But, according to the 9/11 Commission, FAA headquarters never notified NORAD, in Colorado, that Flight 93 was hijacked until after it crashed at 10:03a.m. in a field in western Pennsylvania. No military plans had been scrambled in its direction. No shoot down order had been issued. The only counterattack came from passengers informed of the trade center debacle by phone calls to family and friends on the ground. In under half an hour, a group of strangers had organized to retake the cockpit. They defeated suicide hijackers who were just 20 minutes flying time from destroying the Capitol.

Five years later, the FAA and NORAD operate a permanent conference call known as the Defense Event Network, or DEN, giving officials on both ends a near instant heads up when something is wrong. The FAA and NORAD can also see each other's radar screens, and along with other agencies, they repeatedly undergo drills for aircraft emergencies.

Although Werth retired in 2003, he knows air traffic controllers see themselves as the first line of that improved air defense.