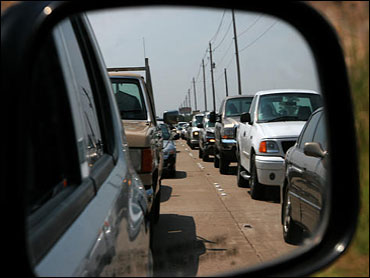 Hurricane Rita grew into a monster storm with 170-mph sustained winds as it swirled toward the Gulf Coast, prompting more than 1.3 million residents in Texas and Louisiana to flee in hopes of avoiding a deadly repeat of Katrina.

"If there was a Category 6, Rita would be there," said CBS News Meteorologist George Cullen. "This is an incredible storm right now, the third most intense hurricane ever recorded."

The line of cars heading away from the Texas coastline said it all, reports CBS News Correspondent Lee Cowan. More than a million people are under orders to evacuate, and even though it was Rita they were running from, it was Katrina they were thinking about.

"It's not worth staying here," said Celia Martinez as she and several relatives finished packing up their homes and pets to head to Houston. "Life is more important than things."

Galveston is a city of about 58,000 people perched on a barrier island. It was here the deadliest hurricane on record slammed ashore in 1900, killing 8,000 people. Most of them drowned.

Rita could bring a storm surge as high as 20 feet, and as far inland as five miles. If it's even close to that, computer models project that, even with its 17-foot sea wall, most of Galveston could be under water again.

"The water is going to rise very, very rapidly. If you stay there, you don't have a chance," warned KHOU meteorologist Dr. Neil Frank, a former head of the National Hurricane Center.

"Not a good picture for us," city manager Steve LeBlanc said.

As Gov. Rick Perry urged residents along the state's entire coast to begin evacuating well in advance of Rita's predicted Saturday landfall, New Orleans braced for the possibility that the storm could swamp the misery-stricken city all over again.

Forecasters said Rita could be the strongest hurricane on record to ever hit Texas. Only three Category 5 hurricanes, the highest on the scale, are known to have hit the U.S. mainland — most recently, Andrew, which smashed South Florida in 1992.

This time, FEMA is leaving no stone unturned, no bus unchartered, to get ready for the next monster hurricane, reports CBS News Correspondent Randall Pinkston.

Hundreds of buses were dispatched Wednesday to evacuate the poor and move out hospital and nursing home patients, and truckloads of water, ice and ready-made meals, and rescue and medical teams were on standby in an effort to show the lessons learned in Katrina.

That didn't happen with Katrina.

"Every mayor, every government official had some frustrations with FEMA," said mayor Ben Morris of Slidell, La., where only Wednesday FEMA opened a disaster center.

The frustrations reached as far away as the state of Maine, where officials received ice that was supposed to go to the Gulf Coast.

At 8 a.m. EDT Thursday, Rita was centered about 490 miles southeast of Galveston and about 595 miles east-southeast of Corpus Christi, and was moving west-northwest near 9 mph. Forecasters predicted it would come ashore along the central Texas coast between Galveston and Corpus Christi, and even if it weakens as expected, the Hurricane Center says it will be at least a Category 3 storm.

Hurricane-force winds extended up to 70 miles from the center of the storm, and even a slight rightward turn could prove devastating to the fractured levees protecting New Orleans.

"We hope and pray that Hurricane Rita will not be a devastating storm, but we got to be ready for the worst," President Bush said in Washington.

In the Galveston-Houston-Corpus Christi area, about 1.3 million people were under orders to get out, in addition to 20,000 or more along the Louisiana coast. Special attention was given to hospitals and nursing homes, three weeks after scores of sick and elderly patients in the New Orleans area drowned in Katrina's floodwaters or died in the stifling heat while waiting to be rescued.

In Houston, the state's largest city and home to the highest concentration of Katrina refugees, geography makes evacuation particularly tricky. While many hurricane-prone cities are right on the coast, Houston is 60 miles inland, so a coastal suburban area of 2 million people must evacuate through a metropolitan area of 4 million people where the freeways are often clogged under the best of circumstances.

Meanwhile, the death toll from Katrina passed the 1,000 mark Wednesday in five Gulf Coast states. The body count in Louisiana alone was put at nearly 800, most found in the receding floodwaters of New Orleans.

Crude oil prices rose again on fears that Rita would destroy key oil installations in Texas and the gulf. Hundreds of workers were evacuated from offshore oil rigs. Texas, the heart of U.S. crude production, accounts for 25 percent of the nation's total oil output.

Jennifer McDonald in Galveston planned to ride Rita out. She and her husband have enough food and water to last 10 days in their wooden house. If it gets really bad, the couple will take to the roof.

"If it goes, it goes," the 42-year-old nurse said of the house. "We're completely prepared."