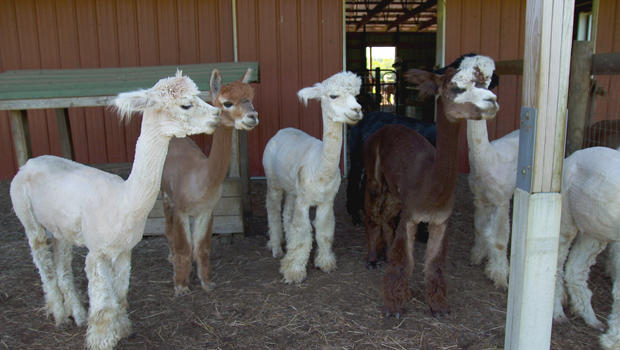 At Alma Park Alpacas, in Jobstown, N.J., Rose Mogerman tends a herd of 56 animals, using their fur to stock her yarn shop. But back in the early 2000s, she was a private IT consultant, with 200 acres of unused farmland -- and a hefty tax bill.

"It was a combination of both," Mogerman replied. "I wanted to do something useful with my property, and I do love animals. But yes, in the beginning I was like, this is a great opportunity."

She bought 13 alpacas, deducted the entire $50,000-plus sale price from her income taxes, and instantly dropped her state property taxes from $18,000 a year to $1,000 -- just because she put alpacas on her property.

"I can tell you for a fact that when I got into it, I think there were people who simply got into it for that [reason]," she said.

A cousin of llamas, and native to Peru, alpacas arrived in America in the 1980s, and are prized for their fleece. Under the current tax code they are considered livestock, like sheep or cattle. That makes their purchase price and maintenance tax-deductible.

There are now at least 140,000 alpacas in the United States -- and at least one U.S. senator is concerned people are using alpacas to get tax breaks.

As a whole, tax write-offs cost the U.S. Treasury about $1.2 trillion in 2015. That's more than all the discretionary spending approved by Congress combined.

Flake argues that the government should stop supporting what he considers "exotic pets."

"Some tax breaks are simply a drain on the Treasury, and I would put this in that category," he said. "I'm not trying to tell them, 'Don't own alpacas.' But I am saying that we have to right-size our tax code."

"So in your view the alpaca industry is not a legitimate, successful industry?" Dokoupil asked.

"Well, it's not like livestock. There's no legitimate market."

Bud Synhorst, executive director of the Alpaca Owners Association, argues, "We are a livestock industry. Just like the sheep industry, we shear our animals once a year, we turn that into marketable products -- clothing and things -- for end users."

Synhorst admits that alpaca fiber is not yet mainstream. But he says alpaca farmers deserve the same support as other small business owners.

"I don't talk to a lot of our owners who say, 'I got into this because I needed a tax break,'" he said.

Rose Mogerman says her alpaca business doesn't need any tax help. Still, she hopes Flake reconsiders for the sake of other alpaca owners.

Flake's report details as much as $50 billion in tax breaks, including deductions for gamblers and golf course owners. But alpaca owners have been among the most vocal in response.

The senator reports he's getting alpaca pictures, mailers and "a very nice" T-shirt.