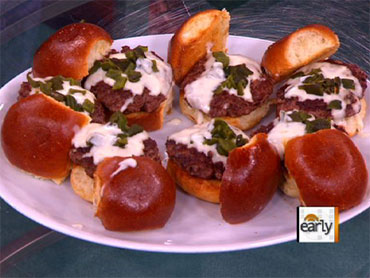 The New York City Wine and Food Festival is only three years old, but it's already taking the Big Apple by storm - and is already one of the nation's biggest, enabling folks to get up-close-and-personal with many top chefs from around the country.

Among those there were Rachael Ray, Martha Stewart and "Early Show" contributor Katie Lee.

The four-day affair wrapped up Sunday, after drawing thousands to more than 125 food and wine tastings, including samplings of the personal favorite of super chef Bobby Flay - the burger.

And the highlight of the weekend happened to be Friday night's "Burger Bash," where more than two dozen leading chefs fired up their grills and created signature burgers, all vying for the title of Burger Bash Champion. Ticket-holders got to taste all the offerings and cast their vote for the best burger and, as luck would have it, Flay's bested the others, and he took home the $5,000 People's Choice Award in that category.

It was his Santa Fe burger, which has a queso sauce with pickeled chilis. And then, for crunch -- crispy blue tortillas.

Ray told Flay burgers matter to her due to the "accessibility factor. You can pick it up with your hands, its friendly it says everybody is welcome here."

On Saturday night, Flay again took center stage when he hosted another of the most popular festivities, the "Tacos and Tequila" event, at which he invited some of his friends to come up with their own spin on the classic taco.

On "The Early Show" Monday, Flay - a contributor and the show's resident chef - took viewers behind the scenes at the festival and let them in on his award-winning burger recipe.

TO SEE THE BURGER RECIPE, GO TO PAGE TWO.

METHOD:
1. Preheat the oven to 375°F
2. Put the chile on a rimmed baking sheet, rub with 1 tablespoon of the oil, and season with salt and pepper. Roast in the oven until the skin of the chile is blackened, about 15 minutes. Remove the chile from the oven, place in a bowl, cover with plastic wrap, and let the chile steam for 15 minutes. Peel, stem, and seed the chile then coarsely chop it.
3. To make the queso sauce, melt the butter in a small saucepan over medium heat. Whisk in the flour and cook for 1 minute. Add the milk, increase the heat to high, and cook, whisking constantly, until slightly thickened, about 5 minutes. Remove from the heat and whisk in the cheese until melted; season with salt and pepper. Keep warm.
4. Divide the meat into 4 equal portions (about 6 ounces each). Form each portion loosely into a 3/4-inch-thick burger and make a deep depression in the center with your thumb. Season both sides of the burger with salt and pepper. Cook the burgers, using the remaining 1 1/2 tablespoons oil.
5. Place the burgers on the bun bottoms and top each with a few tablespoons of queso sauce, chips, and some of the poblano. Cover with the bun tops and serve immediately.