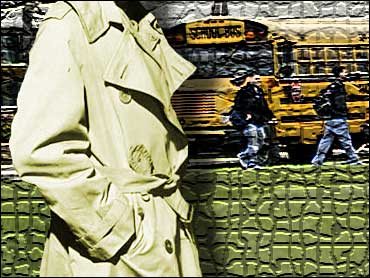 Some high school girls have taken revenge on a suspected serial flasher.

There'd been several reports of a man exposing himself to students from St. Maria Goretti's High School for Girls in Philadelphia. The man would hide behind a van and wait for girls to walk by. Then he'd jump out, expose himself and run away. Police told the Philadelphia Inquirer he was suspected of flashing 13 victims in seven different incidents.

The same thing happened Thursday, but this time, police say some store owners saw what the man was doing and began yelling at him. Then, three of the girls who'd been victimized a few days earlier saw the man and also began to yell at him.

At that point, a group of about 20 students from St. Maria Goretti chased the suspected flasher down the street, wrestled him to the ground and held him there until police could take him into custody.

The suspect suffered a cut lip. He will face a variety of charges once he is arrested on a warrant charging numerous counts of corrupting the morals of a minor, stalking, harassment and indecent exposure, police spokesman William Colarulo told the Inquirer.

"The Goretti girls were very courageous and they obviously weren't afraid to mix it up with this guy," said Colarulo.

"I'm happy he's off the street," said Caitlin Dalin, 14, a Goretti ninth-grader. The flasher exposed himself to Dalin twice, she said. Dalin also told the Inquirer she kicked the suspect with her Eastland black school shoes.

When the suspect ran out of breath from all the running, he sat down on a nearby stoop to catch his breath. "He was like 'what did I do? I did not do anything,'" sophomore Dorothy Kopicko told the Inquirer.

The girls' mothers were beaming last night about their daughters.

"We're proud of them that they took action and because of that, he's off the street," Kathy Dalin told the Inquirer.