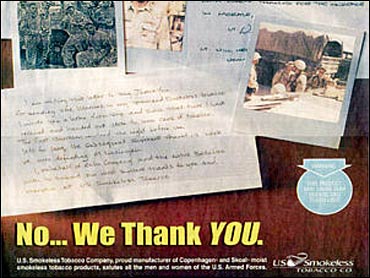 Reps. Henry Waxman, D-Calif., and Bill Janklow, R-S.D., said the giveaway and subsequent marketing by U.S. Smokeless Tobacco Co. amounted to an irresponsible attempt to return to the days in which service members were given free cigarettes in their ration kits, which ended in 1975.

"It appears that U.S. Smokeless Tobacco is seeking to revive the disastrous policy of distributing free tobacco products to men and women in the armed services," the lawmakers wrote in a letter sent to the company Tuesday.

In their letter, Waxman and Janklow cited a Navy and Marine Corps policy that forbids distribution of free tobacco samples to personnel on property controlled by those services.

Janklow, a former smoker, said he got hooked on cigarettes as a Marine.

The lawmakers say they became aware of the company's actions from a U.S. Smokeless Tobacco Co. newspaper ad that showed Marines holding cans of snuff and displayed grateful letters from the Marines to the tobacco company.

Mike Bazinet, a spokesman for the tobacco company, said it sent free snuff to members of all the armed services. He said the company was not trying to attract new customers but was responding to requests from people who already use the company's products.

"They were reporting shortages of our smokeless tobacco products and requesting that we send them some," Bazinet said.

He said there is a long history of snuff use in combat, because troops sometimes fear that lighting cigarettes could attract the enemy.

"These are troops who were experiencing some serious hardships," Bazinet said. "Many were either in combat or facing combat."

Neumann said the Marines also sent U.S. Smokeless Tobacco Co. a letter outlining the policy and asking the company not to run the ad again.

The Air Force also has a policy prohibiting distribution of tobacco samples on Air Force installations. The Army does not have such a policy.

U.S. Smokeless Tobacco Co. entered into an agreement in 1998 with 45 states in which the company pledged to give away free tobacco products only in very limited circumstances, such as at adult-only bars.

Bazinet said California's attorney general recently sent the company a letter inquiring about the free samples sent to U.S. troops. Bazinet said the company does not feel those giveaways violated the 1998 agreement since the samples were sent overseas and not to any of the states that were party to the agreement.