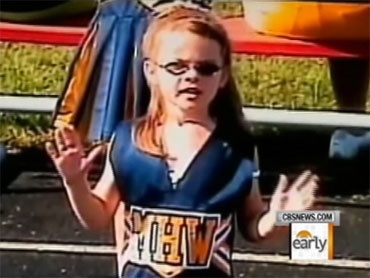 At just 6 years old, Kennedy Tesch was looking forward to the new season on her local cheerleading squad in Madison Heights, Mich. But her season was cut short when the squad had a dramatic reaction after her mother complained that one of the cheers might be a little inappropriate for young girls: "Our back's are breaking, our skirts too tight, we shake our booties from left to right."

When Kennedy's mother, Jennifer Tesch, heard the cheer, she said it was too suggestive for such young girls.

Jennifer said, "Flabbergasted, I guess the best word you can say, because one it doesn't make any sense. To say a 6-year-old should be saying those words is inappropriate."

She asked the team to make some changes in the cheer, but the cheerleading league disagreed with her concerns and instead of modifying it, voted to kick Kennedy off the squad.

Ron Messig, a parent from the area, said, "What it really comes down to is what one person wants against what everybody else wants."

Other parents felt that, since the cheer had been around for some time, they didn't find it offensive.

Jessica Hunter, a parent of a cheerleader, said, "Why can't she go to another team that doesn't maybe have that cheer on their team?"

So for now, Jennifer has been told she can be refunded the money for her uniform, but Kennedy is no longer welcomed on the cheerleading squad.

On "The Early Show", Jennifer said when she heard the cheer for the first time, she was in shock.

Jennifer said, "I've been around cheerleading all my life. I grew up as a cheerleader. I started in this organization. I've been a coach, and I've have never heard this cheer. And to hear this cheer out of my 6-year-old daughter's mouth … I really couldn't comprehend it."

Duane Tesch, Kennedy's father, added he too, thought the cheer's content was inappropriate for a 6-year-old.

Jennifer said she told her daughter she didn't feel comfortable about the cheer.

"(Kennedy) understood that," she said. "You know, when I finally told her the other day that they kicked her off the team, you know, I made sure to know it was nothing she did. She wasn't being punished. Just that people are mad and Mommy and Daddy. And because of that, we were going to have to not be able to go back."

Kennedy told "Early Show" co-anchor Harry Smith she still wants to be on a cheerleading team.

Jennifer said she plans to look for another cheerleading team either this year or next.

"It'll be a different team," she said. "And pursuing it, you know, they said we could come back next year. That's not going to happen. I just want them to acknowledge that kicking her off for their reaction to what I did was uncalled for. Regardless of if they thought I did it wrong, I don't think I did, but, if they did, it just wasn't right to punish her."

Jennifer says that, aside from this cheerleading organization, she's had wide support from others.