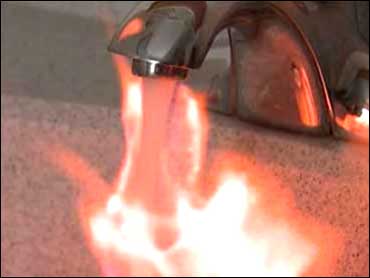 A Colorado couple says they have so much natural gas in their water they can light it on fire, reports CBS4 Denver's Shaun Boyd. Jesse and Amee Ellsworth, of Ft Lupton, a tiny city north of Denver, say the gas has been leaking into their water well from a nearby gas well for the last six months.

Aimee Ellsworth says their only clue that something was wrong was the pressure of the water.

"It crashed, made noises. I thought this isn't normal." She says tests found explosive levels of the gas in her basement, bathroom and by her water well. "I'm jittery all the time" says Ellsworth. Her home is located in a rural area within a half mile of eight natural gas wells.

The Colorado Oil and Gas Commission says it's tried to find the origin of the leak. Director Dale Neslin says "We've looked at well compilation reports, taken gas samples to look for a match, done pressure testing and we've not been able to find the well that appears to be causing the problem."

Local Video from CBS4 in Denver