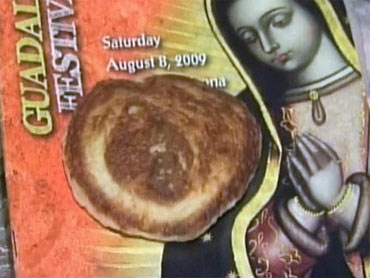 The tragedy at the Station nightclub in West Warwick, R.I. last year has made fire safety a national issue.

And if you want to see what fueled the inferno, you might not have to look beyond your own living room, says CBS News Correspondent Tracy Smith.

According to experts, one reason the Station fire was so fast and so lethal was the polyurethane foam sound-proofing that lined the walls. It's the same material that can probably be found in mattresses.

An overflow of crowds, a fast-moving fire and a desperate rush for the exits were a recipe for disaster at the nightclub. The fire moved from the stage to the polyurethane foam insulation on the walls and ceiling, creating an inferno of searing heat and thick, toxic smoke. For dozens inside, it was a deathtrap. For firefighters, tragedies involving burning polyurethane foam are common.

Seating furniture of all types contains polyurethane foam, whether it is used in office chairs or upholstered furniture that is used in the home.

"Records indicate that there are at least two people each day that are dying in fires of this kind," says National Association of State Fire Marshals George Miller. "Firefighters generally refer to this product as solid gasoline … This material burns rapidly. It burns with a tremendous amount of heat -- giving off toxic gases and smoke."

As a result, Miller says, people die and are injured from the foam.

One morning in March 1996, David Motts and his wife Deanna awoke to find their house ablaze. As David Motts frantically searched for his three-year-old son, he was burned over 80 percent of his body. His son made it out alive, and in the hospital, David thought he saw his wife. But, It was only a drug-induced dream.

"I asked several times, 'Where she was? Why had she stopped visiting?' And, they told me that she didn't make it," Motts remembers.

Deanna Mott was suffocated by toxic fumes. It was later determined that a cigarette lighter ignited a sofa filled with polyurethane foam. The ensuing fire was fast and fierce. The surviving members of the Mott family sued the furniture manufacturer.

"This is not an isolated accident," says Robin Foster, attorney for the Motts family. "If you want to call it an accident, it's occurring about two times a day in America because of upholstered furniture and the polyurethane foam within. I don't believe that's an accident. I believe that's a design flaw."

If polyurethane foam has a design flaw, it's one few consumers know about. Congress is now considering new legislation that would require that the foam used in furniture be fire-retardant.

In 1988, in Great Britain, they passed a similar law requiring fire retardant materials in furniture. Since then, they say it has saved nearly 2,000 lives.

The Polyurethane Foam Association declined an interview, but it said in a statement that even fire retardant materials "have the potential to burn if exposed to enough heat and a source of ignition. The best protection, and first line of defense, should be to practice responsible fire prevention in the home."

Fire Marshal George Miller says, while people are waiting for the legislation to pass, they should be extremely careful about ignition sources in the home.

"Make sure kids don't have access to lighters and matches," Miller adds.

Fires from polyurethane foam may be caused by accidents, but they are preventable.

Extended Warranties: Worth The Cost?