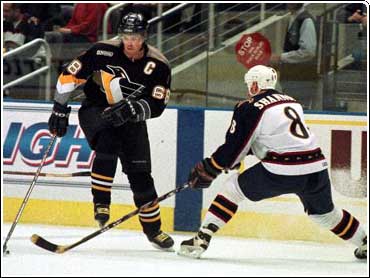 The Atlanta Thrashers acquired forward Hnat Domenichelli and the rights to forward Dmitri Vlasenko from the Calgary Flames on Friday for defenseman Darryl Shannon and forward Jason Botterill.

The Thrashers, tied with Montreal as the NHL's lowest-scoring team before Friday's game against San Jose, made the deal in hopes of improving their offensive skill level.

"We've got the third and fourth lines well covered," Waddell joked during the first intermission. "Now, we've got to find some guys who can play on the first two lines."

Shannon, 31, had five goals and 18 points in 49 games with the Thrashers, but he will be an unrestricted free agent at the end of the season. Not surprisingly, the Flames also wanted Botterill, whose father, Cal, works for the team as a sports psychologist.

Domenichelli, 23, had five goals and nine assists in 32 games with the Flames. He began the year with Saint John of the American Hockey League, scoring six goals and seven assists in 12 games.

Vlasenko, 22, was originally selected by the Flames with their fourth choice in the 1996 entry draft, but he never signed with the NHL team. He spent the last four seasons with Yaroslavl of the Russian Elite League, scoring 25 goals in 130 games.

Waddell decided to make the deal after watching Vlasenko this week at a tournament in Sweden.

"He has great individual skills," Waddell said. "There's only a few ways to get skills players: through the draft or taking some chances with younger players."

Waddell didn't want to give up Botterill, 23, who has split the season between Atlanta and Orlando of the International Hockey League. He had one goal and four assists in 25 games with the Thrashers.

"We feel like he's going to play in the NHL a long time," Waddell said. "We hope it's one of those deals that works out for both teams."

The Thrashers recalled defenseman Brett Clark from Orlando to take Shannon's spot on the roster.