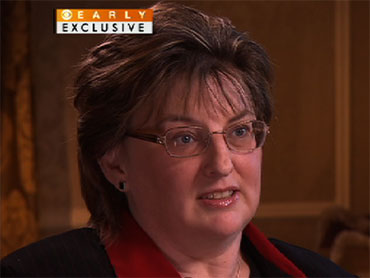 On December 14, Clay Duke, a troubled ex-con, drew a gun during a Panama City, Fla. school board meeting and took six people hostage. The harrowing drama ended with his death.

Yesterday, Clay Duke's widow, Rebecca Duke, sat down with "Early Show" co-anchor Erica Hill to explain who her husband was and to try to shed light on the reasons for his violent attack.

Rebecca Duke told Hill she was among those shocked as she watched her husband on the surveillance tape.

For Rebecca Duke, Hill said, the scene is still unimaginable. Rebecca Duke says her husband of more than a decade was a gentle, compassionate man with a great sense of humor.

"He always wanted to do the right thing," she said. "He was a family man."

Hill asked, "He was not a violent man to you?"

In the months leading up to the shooting, Duke faced mounting pressures. According to his former attorney, he had trouble keeping a job and could not afford his medication for a bipolar disorder.

Rebecca Duke had also been laid off from her job with the Panama City schools.

Hill said, "Your unemployment was to run out that week. Clay was having a hard time, like so many Americans right now, finding a job. Had you two discussed at all what was going to happen next?"

"I told him," she answered, "I said, 'You know, we just get through, you know, Christmas, it'll all work out somehow.' He was -- I guess -- just too much, I reckon for everybody, I mean, just like everyone's struggling right now. It's really a hard, hard, hard time."

Rebecca Duke says her husband's frustration with society was reaching a breaking point.

Clay Duke could be heard in the video of the school board shooting saying, "Our benefits have run out. We're broke. You see what I'm saying."

Rebecca Duke told Hill, "Time after time, we've asked for help, and you just slammed the door in our face."

Hill said, "It must have been difficult for you. And as people speculate as to what may have been going through his mind, what do you think happened that day?"

"Honestly, I don't know what triggered it that day," Rebecca Duke said. "And that's going to be a question that I'm going to be asking myself for the rest of my life."

What we do know is that, soon after pulling out his gun, Clay Duke announced he was prepared to die.

In the video of the shooting, someone tells Clay Duke, "I got a feeling that what you want is for the cops to come in and kill you because you're mad. Because you said you're gonna die today."

Clay Duke can then be seen aiming his gun at the school board and firing shots at close range.

But he didn't hit anyone. Rebecca Duke says that was no accident.

"He was in the Air Force," she said. "He did two separate, different tours. And he was trained in guns. And he was a good shot."

Hill asked, "Do you believe that he was trying to hit anyone with those bullets?"

"He was not trying to hit anybody," Rebecca Duke said. "He was just trying, in my opinion, he wanted to scare them. From what I can tell, he wanted them to get down, I mean just from his body language alone. He honestly didn't want -- didn't want to hurt, anybody. You know?"

Jones hit Clay Duke three times in the back. Then, lying on the floor wounded, Clay Duke turned the gun on himself, and took his own life.

"I feel for everyone in that school board. I feel for Mike Jones," Rebecca Duke said. "That's why I actually came out and spoke, because I felt I needed, Mike of all people, to know how I felt."

"How is the rest of your family, and the rest of Clay's family holding up right now?" Hill asked.

"They're overwhelmed and devastated, as well," Rebecca Duke said. "And they're trying to cope the best way that they can. The reason I agreed to do this is to -- to give my husband and his family some dignity and respect, because this was an honorable man. And he deserves it, cause he was a man and a father, a grandfather, a son, and a husband before he was a gunman."

Understandably relieved that no one was hurt, Rebecca Duke says she will spend the rest of her life trying to understand what happened -- and will never stop missing the Clay Duke she knew -- the man who was her soulmate.

"I am really numb. I feel like I died that day," Rebecca Duke said. "To love someone and to get that kind of connection in life is very rare and it is a gift from God. And that's why I'll cherish this. And that's why this is so hard for me, because I feel my soul's been ripped out, and I don't know how to get it back or even deal with it."