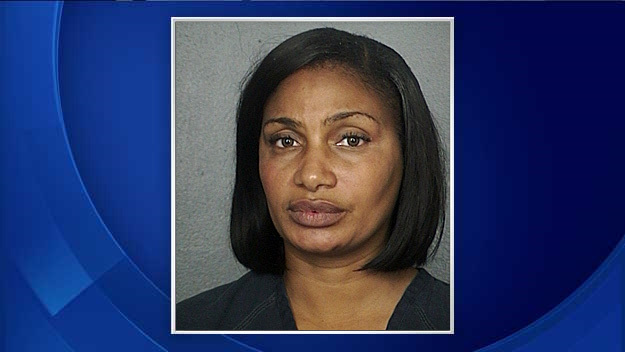 OPA-LOCKA, Fla. - The girlfriend of a Miami police officer who was found dead in his home earlier this month has been arrested and charged in his murder, reports CBS Miami.

Tiniko Thompson was taken into custody Wednesday evening and charged with second-degree murder. Pembroke Pines Police say evidence collected at the home of Carl Patrick, 53, shows Thompson was responsible for the officer's May 7 death. His body was found May 9.

Prior to Thompson's arrest, her attorney alleged that Patrick had hit her and that she and Patrick struggled over a gun and that Patrick shot himself. Thompson apparently failed to report the shooting for two days, according to the station.

CBS Miami reported that Thompson was arrested after police determined there was no gunpowder residue on Patrick's hands and that the trajectory of the bullet into his arm and chest made it impossible for him to have shot himself.

The station also reported that Patrick was alive for several hours after the shooting and had been wrapped in a comforter. In addition, an arrest affidavit reportedly says that Patrick's injuries would have been survivable had medical assistance been obtained.

A source also reportedly told the station that Thompson tried to clean up the crime scene and took Patrick's cell phone so that he couldn't call for help. The source said Thompson left behind a note saying the shooting was accidental.

She was reportedly taken into custody after being pulled over by police while driving in a Mercedes with Vereen.

Sgt. Javier Ortiz, President of the Miami Fraternal Order of Police, questioned how the arrest occurred and sent a news release to the media asking, "Why was a cop killer given white glove treatment?"

"The question we have here is who made the decision to allow a cop killer to call the shots on how they were going to be taken into custody?," Ortiz wrote in the statement.

Thompson, who is 46 according to the Sun Sentinel newspaper, was ordered held without bond during an initial court appearance Thursday, according to CBS Miami.