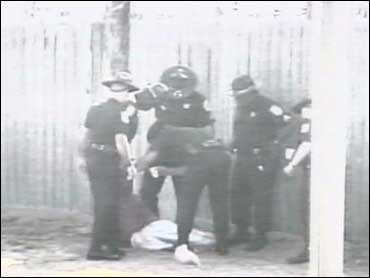 Federal officials will not pursue civil rights violations or other charges against the boot camp guards implicated in the death of 14-year-old Martin Lee Anderson, the boy's relatives and their attorney said Friday.

Ben Crump, an attorney for the boy's parents, said they were told of the decision during a meeting with representatives of the U.S. Justice Department. Supporters gathered outside the federal courthouse in Tallahassee during that meeting.

Anderson died in 2006 after being hit and kicked by seven guards as a nurse watched. A videotape of the 30-minute incident attracted national attention and led to the closure of Florida's boot camps for juvenile offenders.

A state court jury acquitted the guards and the nurse of manslaughter on Oct. 12, 2007.

Federal authorities then began investigating whether the boy's civil rights were violated.

Anderson died Jan. 6, 2006, a day after he was hit and kicked by the guards. He had just been assigned to the camp after he was caught trespassing at a school, which violated his probation on another charge.

The video showed the seven men punching Anderson and using knee strikes against him. It also showed them pushing ammonia capsules into his nose and dragging his limp body around the camp's yard. The nurse did not appear to intervene in any way during the incident.

A coroner initially ruled that Anderson died because of a fatal hemorrhage related to a previously undiagnosed case of sickle cell anemia trait. Protests of that ruling inspired then-Gov. Jeb Bush to order an independent prosecutor to look into the case.

A subsequent autopsy determined that guards killed Anderson by depriving him of oxygen when they pushed the ammonia tablets into his nose and covered his mouth.

The acquittal in the state's manslaughter case came after a two-week trial in Panama City. Jurors said they agreed with the contention of the guards' attorneys that the men were employing widely-accepted boot camp tactics and that the death was caused by the sickle cell trait.

The family also filed civil lawsuits against the state and Bay County that ultimately resulted in a $7.4 million settlement.