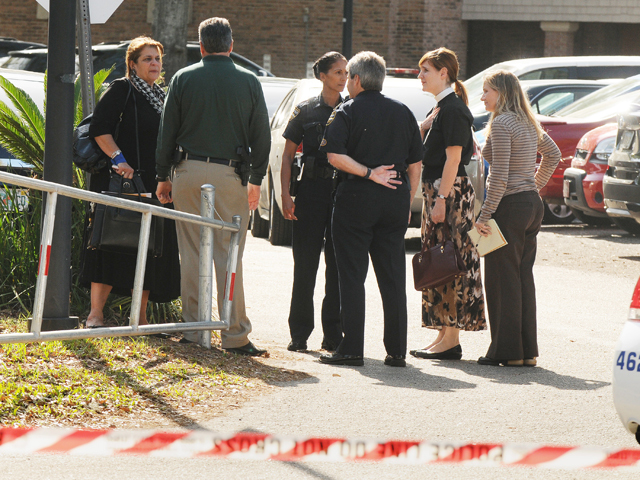 (AP) JACKSONVILLE, Fla. - A man who was fired from a private school on Tuesday returned to campus with a gun hidden in a guitar case and shot the headmistress to death before committing suicide, authorities said.

No students were injured.

Officers responded to the Episcopal School of Jacksonville at 1:23 p.m. Tuesday after receiving reports of a person with a gun, and the school was placed on lockdown. When officers arrived, Dale Regan, head of the school, and the gunman were found dead, Undersheriff Dwain Senterfitt said.

Watch a report from CBS affiliate WTEV Jacksonville below:

"Today we have truly lost a great educator and an advocate for all children," said Barbara Hodges, executive director of the Florida Council of Independent Schools.

The sheriff's office identified the gunman as 28-year-old Shane Schumerth. No further information on him was immediately available.

Regan worked at the Episcopal School for more than 30 years, starting as a teacher and going on to become the first female to hold the school's top position. Hodges said she focused on high academic standards but also valued strong relationships with students and teachers.

"She truly focused on the whole being, the whole child," Hodges said.

Recently, Regan had opened two academic halls with new technology, designed to foster innovation in teaching. They were the first new classrooms since the school's founding.

Hodges recalled walking through the new rooms with Hodges just before they were opened last year.

"You could see that she was dreaming about all the incredible programs that would happen in that building and how that would impact the lives of students," Hodges said.

Hodges had visited Regan just two weeks ago and was exchanging emails with her Tuesday morning. Regan was president of the Florida Council of Independent Schools board, and they were discussing their upcoming meeting and planning new programming.

"There was nothing that indicated anything was amiss," Hodges said.

Vigils have been planned for Regan. The school said in a statement it would provide counseling to students and faculty.