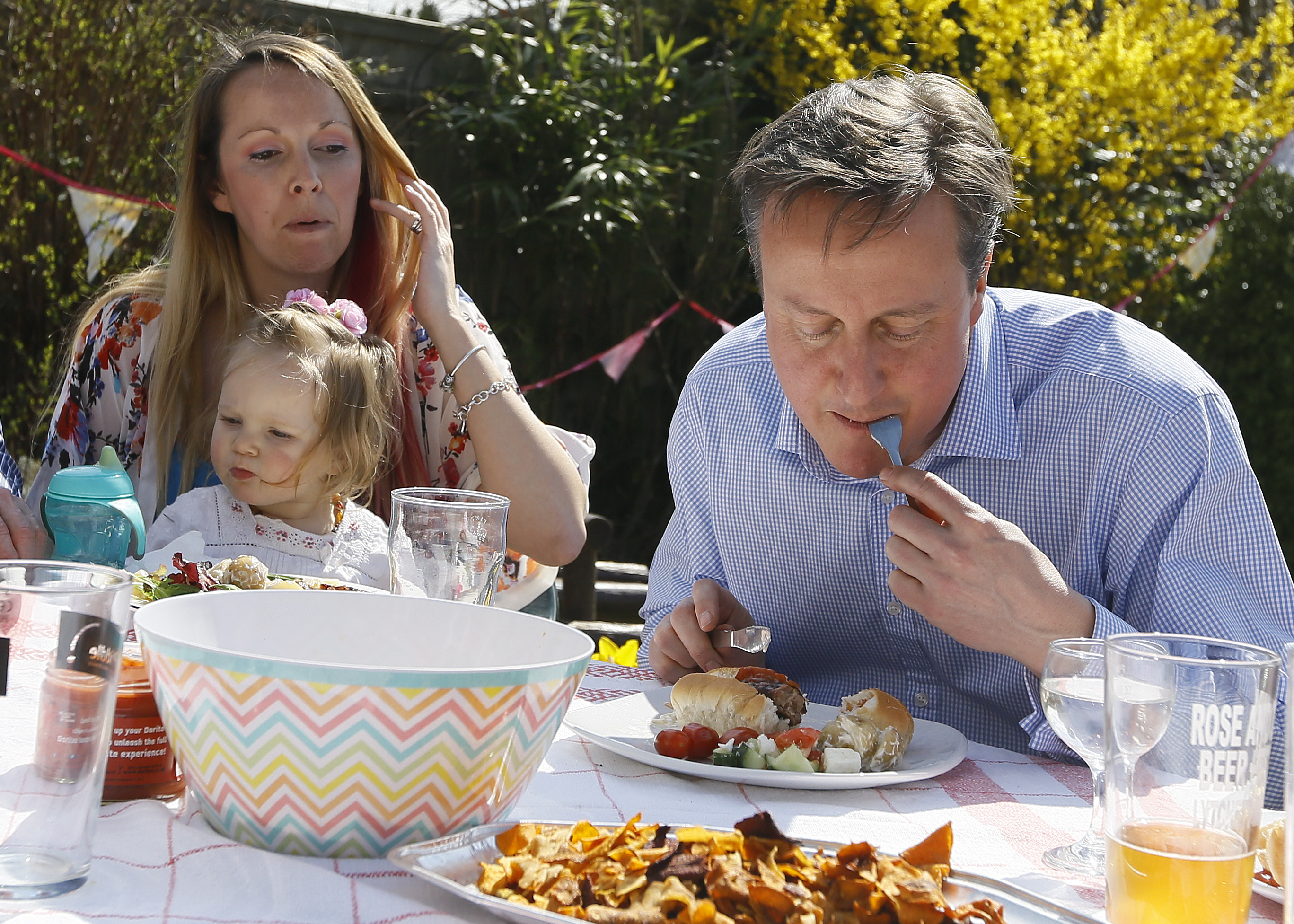 Facing a tough reelection battle, British Prime Minister David Cameron set out Monday to prove he's a man of the people. He visited a family near Poole to highlight the benefits of tax and pension reforms his government championed, and he shared a meal with the family in their backyard.

It was a charming bit of stagecraft - the sun was shining, the children were smiling - but Cameron's salt-of-the-earth shtick quickly unraveled after he was photographed eating his hot dog with a knife and fork.

The reaction from Brits and the press was swift and damning.

The reptilian theory surely bears closer examination, but the real problem for Cameron was that the episode reinforced a caricature his opponents have cultivated for years - that he's too upper-crust, with his aristocratic heritage and his elite education at Eton and Oxford, to relate to ordinary Brits.

It's possible Cameron was only taking a cue from the British royal family. When King George VI and Queen Elizabeth visited then-President Franklin Roosevelt at Hyde Park in 1939, they were served hot dogs at a picnic, but they couldn't agree on how to eat them.

"The King ate the hot dogs with gusto," recalled historian Arthur Schlesinger in 1989, according to the New York Times. "But the Queen, baffled by how to approach them, finally settled for using a knife and fork instead of following the President's advice to push them into her mouth," the paper added.

Whether Cameron's decision to use cutlery was an error or not - one always hesitates to ascribe errant behavior to the queen - the prime minister should take heart in the knowledge that he's hardly the first public figure to face ridicule over his gastronomic pursuits on the campaign trail. American politicians have actually spent years honing the art of the food-based faux pas. Here are a few examples.

Shortly after he took office last year, New York City Mayor Bill de Blasio stopped by a Staten Island pizzeria, Goodfellas, where he drew the wrath of city residents after he was filmed carving into his pizza with a knife and fork.

"De Blasio, you son of a b*tch," exclaimed Jon Stewart, the host of the Daily Show and a native New Yorker.

"You're supposed to be the champion of the middle class. Two weeks into your term, and we catch you eating pizza a la Trump," Stewart added, referring to a 2011 incident in which billionaire real estate developer Donald Trump and former Republican vice presidential nominee Sarah Palin were mocked for eating pizza with utensils at a Times Square eatery.

De Blasio leaned on his Italian roots to explain away any perceived heresy, saying, "In my ancestral homeland, it's more typical to eat with a fork and knife."

Stewart wasn't having it. "Were you elected the mayor of Italy?" he asked. "No."

In March 2012, Republican presidential candidate Mitt Romney was stumping in Mississippi, and he greeted a crowd with a touch of Dixie in his voice.

"Morning, y'all," he began. "I got started this morning right with a biscuit and some cheesy grits."

The line was an attempt to ingratiate himself with southern voters, who'd thus far been more supportive of Romney's primary rivals Newt Gingrich and Rick Santorum. But it came across as a bit pandering, and more than a bit inauthentic. To start, some pointed out, he didn't even label the food correctly.

"Face the Nation" host Bob Schieffer, a native southerner, said he's not sure what the proper term would be in Mississippi, but in Texas at least, "They call them cheese grits. Like cheese burgers. Nobody says cheesy burgers. Same with grits."

Later that year, Romney again stumbled over a regional food dialect during a stop at Wawa in Pennsylvania, when he ordered a "sub" rather than a "hoagie," as the sandwich is called in the area.

"A sub! In the heart of hoagie country!" exclaimed Grub Street Philadelphia's Colin Keefe. "[Romney] completely dissed one of Wawa's proudest achievements, their prized specialty hoagies. Instead, he ordered a meatball sandwich. With pickles and sweet peppers. Ew."

John Kerry gets too fancy with his cheesesteak

Then-Democratic presidential nominee John Kerry was stumping in Pennsylvania in August 2004 when he stopped by Pat's King of Steaks in Philadelphia to enjoy one of the city's iconic cheesesteaks. But Kerry quickly stepped in it when he asked for his sandwich with Swiss cheese instead of cheese-whiz.

"Gasp!" wrote Philadelphia Inquirer restaurant critic Craig LaBan. " Swiss cheese, as any local knows, is not an option. The Massachusetts Democrat may as well have asked for cave-aged Appenzeller. But even when Kerry was given a proper cheesesteak hoagie, he made matters worse by delicately nibbling at it as if it were tea toast. Not a cool move for the Boston Brahmin trying to prove he can hang with youse guys down at Ninth and Wharton."

The incident went viral, and it was generally regarded as a missed opportunity for Kerry, one of the Senate's wealthiest members, to connect with ordinary voters. " Even the bluest blood can suddenly become more human to the masses if he emerges from this two-fisted trial of appetite with a swagger and some juice on his loafers," explained LaBan. "If not, well..."

Compounding Kerry's faux pas, a stream of customers seized the opportunity to crack Swiss cheese jokes to the unfortunate staff at Pat's for several days after the incident. "This isn't funny anymore," one employee warned, according to the Inquirer. "Somebody's gonna get hit."

Would you have any Grey Poupon, Mr. President?

In 2009, President Obama and Vice President Biden took a trip to Ray's Hell Burger in Arlington, Virginia, and when it was the president's turn to order, he left no detail up to chance.

Conservative media outlets pounced almost immediately. The next night, on a segment of "Hannity" headlined "President Poupon," host Sean Hannity ridiculed the president for his "very special" choice of condiment.

"I hope you enjoyed that burger, Mr. President," Hannity snarked.

That same day, conservative radio host Laura Ingraham lit into the president for his order. "I don't even like the way the man orders a hamburger," she said. "What kind of man orders a cheeseburger without ketchup but Dijon mustard?"