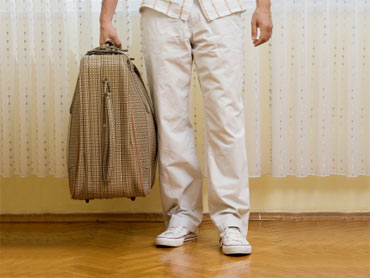 Greenberg first shared so-called "secret flights." He said they aren't officially secret, but these scheduled flights are published, but no one knows about them.

"They're on airlines that you would never expect to fly these routes," he said.

Greenberg said the fares are either comparable to the airlines you'd expect would fly the routes or much cheaper, and the flights are hardly ever full.

An example of these flights is a flight from John F. Kennedy Airport in New York to Vancouver in British Columbia.

Flying from JFK to Vancouver?

"Most domestic airlines can get you there, with a stopover," he said. "But Cathay Pacific is not just non-stop, it's also the cheapest option at $498."

Another surprise flight is available if you want to fly from Los Angeles to London:

Air New Zealand, Greenberg said, flies non-stop from LAX to London, and they serve New Zealand wines throughout the flight -- even in coach. And among the other well known airlines for that route, it's the cheapest at $797.

Another big surprise flight from LAX, Greenberg said, is a flight that flies to Sao Paulo Brazil. No one would guess it, he added, but Korean Air flies nonstop on Monday, Wednesday and Friday between Los Angeles and Sao Paolo, Brazil. Delta seems to be the only other airline that flies nonstop (they code share). And check out this deal: If you wanted to travel between December 23-31st Korean air prices out at $1,861 non-stop, which in many cases is $1000 cheaper than other carriers on the route.

Another stunner Greenberg mentioned is security loopholes.
Greenberg said more than nine years after 9/11, while the Transportation Security Administration, still makes us go through security inspections, what about the 12 million pounds of cargo carried in the very belly of the planes we're traveling on? Greenberg said it's still not thoroughly inspected, or inspected at all.

He said the 12 million pounds of cargo a day works out to 6 billion pounds a year that are not being screened for liquid, plastic or conventional explosives.

"Most of us fly assuming that everything that's on our airplane has been inspected or checked," he said. "Tthink again."

Additionally, in some major cities pilots and flight attendants, he said, do not have to go through security.

Some people may also be shocked to learn that there are expensive and inexpensive airports, Greenberg said.

Greenberg said he always tells people to think of alternate airports whenever possible. For example, he said, go to Providence instead of Boston, Islip instead of LaGuardia, Oakland instead of San Francisco.

And for people traveling abroad, Greenberg said they should know that foreign transaction fees on credit cards may be tacked on and go unnoticed.

"If you're traveling overseas and use your credit or debit card, remember that Visa and MasterCard will likely -- and quietly -- charge you a one percent foreign transaction fee, and your issuing bank will add at least another two percent to that," he said. "On a vacation or business trip, this can easily add up to serious dollars on every single transaction."

Greenberg said a way to get around those fees is to stick with lower-fee banks, such as Capital One, which doesn't charge a foreign transaction fee and absorbs the one percent fee levied by Visa and MasterCard.

He added that when you take your money out of an ATM, you're likely to get hit with a double-whammy: a flat fee -- Wells Fargo has been known to charge as much as $5 per withdrawal -- and a percentage.

To get around that, he said you should check if your bank has foreign alliances. Bank of America, he said, has a no-fee ATM agreement with Barclay's in the United Kingdom, Deutsche Bank in Germany, and Scotia Bank in Canada. In addition, Charles Schwab's high-yield checking account will refund ATM fees you incur abroad, but doesn't apply to ATM transactions other than cash withdrawals (like checking your balance or buying stamps) or to the one percent currency exchange fees levied by Visa and MasterCard.

Greenberg warned some banks are expanding the definition of the term "foreign transaction fee." Generally, he said, a foreign transaction fee is levied when you use your credit card outside of the country. However, lately, he said, some travelers have discovered similar charges even when they never left the country. What's happening, he explained, is that certain banks, including Bank of America and Simmons, now charge the transaction fee for any transactions processed outside of the U.S., so if your airline is based in Asia, or your cruise line is based in Europe, you get nailed with the fee, and in many cases, it may not be obvious where your travel provider does its banking.

In 2006, Visa, MasterCard and Diners Club were slapped with a $336 million settlement for hiding foreign transaction fees and for inflating the base exchange rate when converting the foreign currency into dollars. Greenberg said as a result, you're likely to see the transaction fees itemized on your bill, but that doesn't help take away the sting.

Because of the currency conversion fee antitrust litigation, any holder of a visa, MasterCard, or Diners Club credit, charge, or debit card issued in the U.S.as of November 8, 2006, is a plaintiff and entitled to a refund for foreign transactions between February 1, 1996 and November 8, 2006.

And lastly, Greenberg said the dirtiest items in your hotel room are the bedspread, the TV remote control unit and the telephone handset. He suggests taking the bedspread off the bed immediately.

"Never touch or use it again," he said.

He also suggested using antiseptic wipes on the TV remote control and the telephone.

However, the stunner, he said is waiting for you in the hotel bathroom.

It's the water glasses.

Greenberg said with hotel maids being taxed more and more on their work duties -- some are required to clean up to 15 rooms per shift -- they are simply running out of time. If your room is number 11,12,13,14 or 15 on their shift, he said, they are usually so pressed for time, that they often don't replace the water glasses between guests, but simply -- and quickly -- run them under cold water, do a quick rinse and put them right back on the sink.

Greenberg suggested the minute you check into your room, go into the bathroom, turn on the hot water in the sink and put the glasses under that water for at least three minutes, then wipe each glass clean.