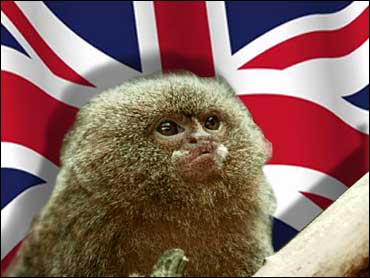 Five endangered monkeys were stolen from a zoo over the weekend in the latest in a recent string of thefts involving small primates across England, police said Monday.

A family of silvery marmosets — a male, a female and 2-month-old baby — and a pair of Geoffrey marmosets were taken late Saturday from nesting boxes at Drusillas Park Zoo in East Sussex. Thieves also tried to break into a third enclosure holding small monkeys, zoo officials said.

Zoos in Devon and Suffolk have also had small monkeys pilfered in recent weeks.

"This is not a casual crime," said John Haywood, coordinator of the National Theft Register for Exotic Animals. "This is extremely well organized, and is no doubt part of a series. These are specialist crimes."

Haywood, who estimated more than 50 small monkeys have been stolen in England and Scotland the past few years, said police believe the breeding pairs of marmosets were taken for use in the international illegal pet trade.

"We think they may have been taken to an illegal breeding station somewhere, with the intent of selling them abroad, across Europe," he said.

Because small monkeys can be successfully bred in captivity, their profit potential is great — but their quality as pets is not, Flamank said.

"They're great — behind glass," he said. "But they wouldn't make great pets. They're not companion animals."

Adult silvery marmosets weigh less than a pound and rarely exceed a foot in length, while the Geoffrey variety is a little larger.

Jazz, the mother in the silvery marmoset family, has a serious jaw condition and could die without medication, Flamank said. Her baby, Larkin, is similarly at risk, having only just been weaned.

"There's always hope. We'd really like to hold out for them to come back," he said.