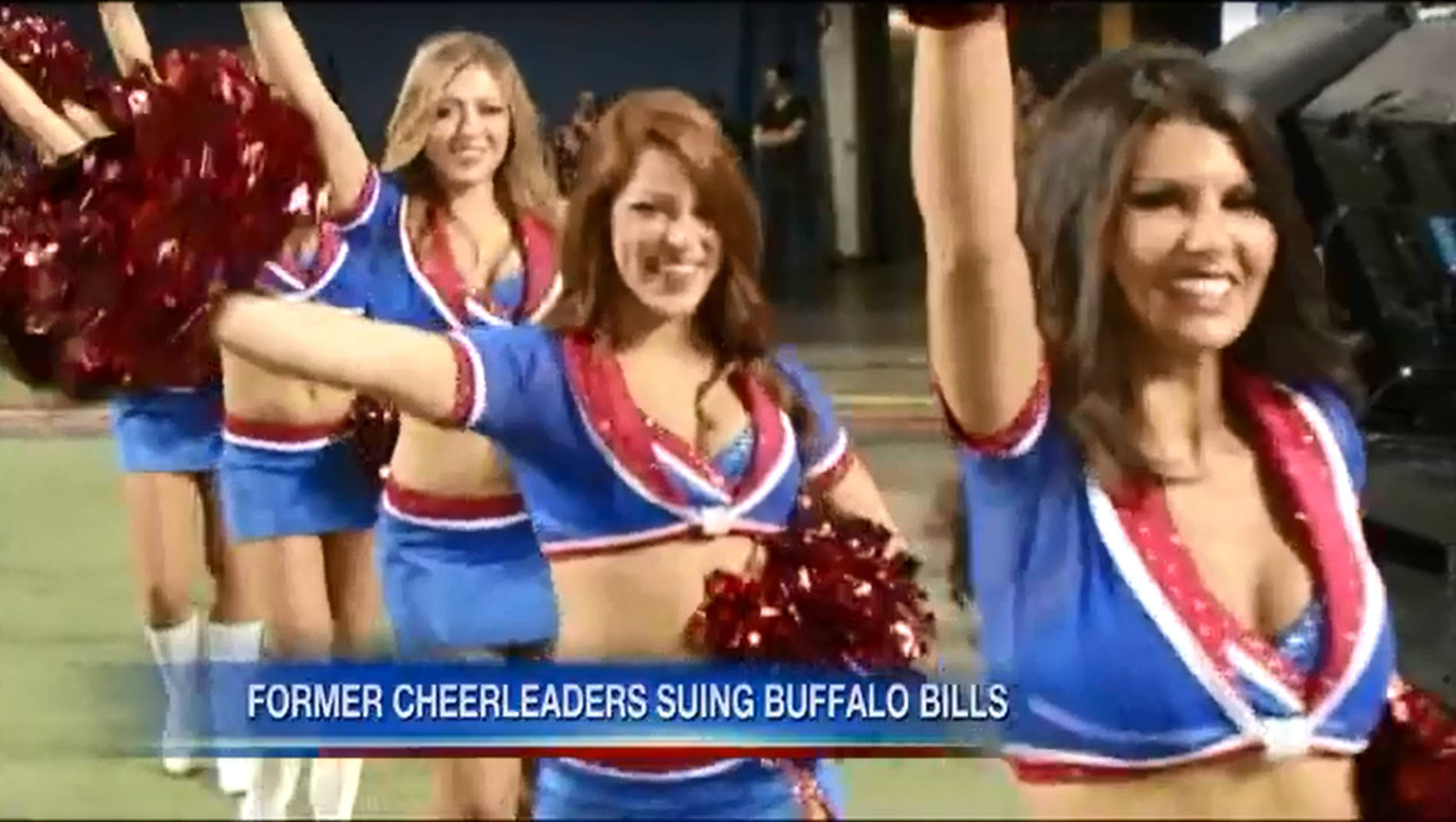 BUFFALO, N.Y. - Five former Buffalo Bills cheerleaders on Tuesday sued the team over a pay system they say had them working hundreds of hours for free at games and at mandatory public appearances at which they were subjected to groping and sexual comments, and one said they had to take a jiggle test so their boss could see how firm their bodies were.

The state Supreme Court lawsuit is the third filed this year against a National Football League team by cheerleaders. The Oakland Raiders and Cincinnati Bengals also have pending wage battles.

The case against the Bills says its cheerleaders, the Buffalo Jills, are wrongly classified as independent contractors and are subjected to policies that violate the state's $8 per hour minimum wage law and other workplace rules. Two members of the Jills squad held a news conference Tuesday with their attorney, Frank Dolce.

"We are Bills fans," Dolce said. "We definitely want our organization and other organizations in the NFL to respect the rights of these cheerleaders."

The Bills' cheerleaders aren't paid for games or practices and have to make 20-35 appearances, most of which are unpaid, at community and charity events each season, the lawsuit said. On top of that, they have to pay $650 for their uniforms and are not reimbursed for travel or other expenses, the cheerleaders said.

The time and expense, as well as rules governing their personal lives, far exceeded what they signed on for, the women said.

The civil action, which seeks unspecified back pay and legal fees, names Stejon Productions Corp., which assumed management of the Jills in 2011, along with former manager Citadel Communications Co. and the Buffalo Bills.

Stejon President Stephanie Mateczun said she could not comment on the claims. Buffalo Bills spokesman Scott Berchtold said the team's policy is not to discuss pending litigation. A Citadel spokesman could not be reached for comment.

The cheerleaders are identified only by their first names and last initials in the lawsuit, which cites a provision that allows plaintiffs to remain anonymous "where identification poses a risk of retaliatory physical or mental harm."

Their complaint describes "demeaning and degrading treatment," including being required to wear bikinis at various events such as an annual golf tournament at which cheerleaders were "auctioned off like prizes" and subjected to "degrading sexual comments and inappropriate touching."

Mateczun, the cheerleaders said, controlled everything from their hair and nail polish color to what they could post on Facebook.

"Everything from standing in front of us with a clipboard having us do a jiggle test to see what parts of our body were jiggling," cheerleader Alyssa U. said, "and if that was something that she saw, you were getting benched."

"The team told us how to walk, talk, dress, speak and behave at work and on our own time," Maria P. said. according to CBS affiliate WIVB.

"We want the community and all the Bills fans out there to see what we went through, to see what we did off the field. They are there on Sundays cheering on the Bills like we were but they don't see behind the scenes," she said.

The cheerleaders and their attorney said they hope their legal action leads to policy changes within the Bills' organization that ensure future cheerleaders are paid and treated better.