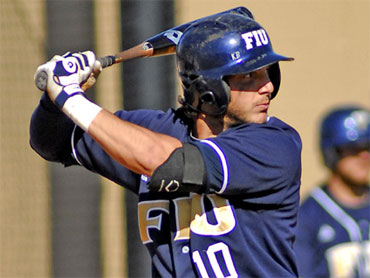 NASSAU, Bahamas - Florida International University's star baseball player and a pair of friends have been charged with raping two 17-year-old girls in the Bahamas, court officials in the islands' capital said Monday.

Twenty-year-old Garrett Wittels was accused of raping a teenage tourist on Dec. 20 while on a visit to the archipelago east of Florida. The standout infielder for FIU ended last baseball season with a 56-game hitting streak, the second-longest in NCAA Division I history behind Robin Ventura's 58.

A friend, Robert Rothschild, 21, of New York, was accused of raping both girls, while Jonathan Oberti, 21, also of New York, was charged with raping one, according to Bahamian court officials. Hometowns for the men were not immediately disclosed.

Chief Magistrate Roger Gomez granted Wittels and the two others $10,000 bail at their Thursday arraignment in Nassau. The U.S. suspects were not required to enter pleas and returned to the United States.

The Miami university's athletic director, Pete Garcia, declined to comment on the rape charge against Wittels.

"We are still in the process of sorting through information," Garcia told The Associated Press on Monday.

Wittels' father, an orthopedist, told The Miami Herald newspaper that son would be vindicated. He said his son was "devastated" by the allegations.

"Anyone can accuse anyone of anything at any time," Michael Wittels told the Miami newspaper during a Monday morning phone interview. "He's not doing well, obviously. He's blown away. He's devastated that someone would accuse him of this."

Michael Wittels, whose telephone appeared to be disconnected later Monday, told the newspaper that his son and his friends met the two girls at a casino and they later went to a private party. The girls apparently described themselves as students at the University of Arkansas, he said.

In the Bahamas, the maximum penalty for a first-time rape offender is seven years.

Bahamian attorney Wayne Munroe, who is representing the U.S. suspects, did not immediately return calls Monday.

Magistrate Derence Rolle-Davis will begin a preliminary inquiry on April 18 to determine if there is enough evidence for the case to go to trial.

Wittels was also the Sun Belt Conference player of the year in 2010 after leading the Golden Panthers to a league championship and NCAA tournament berth.