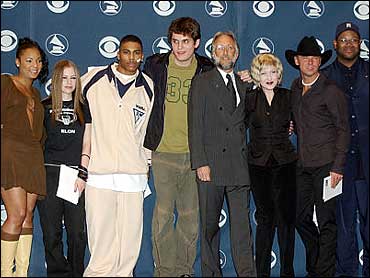 The 45th annual Grammy awards next month will include plenty of new kids on the block along with some musical acts that have been around the block a few times.

Avril Lavigne, the Canadian teenage rocker who helped turn youth interest away from teen pop was nominated in three categories, in one of them she is competing against R&B singer Ashanti.

Asked how they feel about the competition, Lavigne and Ashanti said for now they just enjoy the moment.

"It's just a cool thing to go home and be like yeah, mom and dad, I got nominated for a Grammy. I think that's so cool that we can say that for the rest of our lives," said Lavigne on The Early Show.

Lavigne debuted with a quadruple platinum and Ashanti with a triple-platinum. "The road to success has been a long one but now that we're here everything is happening so quickly. So I think all of us are really happy," said Ashanti. This does not necessarily put pressure on subsequent projects, Nelly said.

"You just do what you do and if your fans are truly behind you they're going to be there, you know," he said. "It's too late to panic now, man. You're already knee deep in it. It's best to just keep your cool and roll, you know."

Nelly had the second best-selling disc of the year with "Nellyville" and two huge hits with "Hot in Herre" and "Dilemma."

Here is a list of nominees in the top twelve categories:

This year's awards marks the ceremony's return to New York after a four-year absence (they've been held in LA for the past four years). Ashanti, Avril Lavigne, Cyndi Lauper, John Mayer, Justin Timberlake, Kenny Chesney, Nelly, and P. Diddy were among the artists who read the nominations.

In addition the President of the Recording Academy (Neil Portnow) spoke, as well as Mayor Michael Bloomberg, and the Harlem Boys Choir performed.

This year, there are 104 Grammy categories, up from 101 last year. Click here for the full nominee list. The Grammy nominations were announced at Madison Square Garden, where the awards will be held Feb. 23. Watch them live on CBS at 8 p.m. ET.