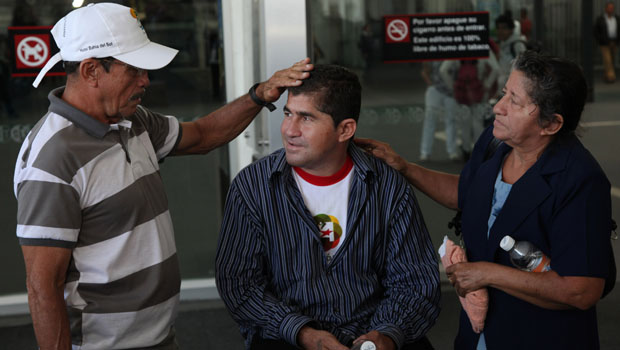 EL FORTIN, Mexico - A Salvadoran fisherman who says he drifted at sea for more than a year met Saturday with the mother of his companion who died during the ordeal, an emotional gathering that he said helped him fulfill a promise he made to his friend.

Jose Salvador Alvarenga embraced his friend Ezequiel Cordoba's mother and both cried as a horde of journalists recorded the moment.

"I would've liked to have welcomed my son like this," said Roselia Diaz Cueto.

"It fills with happiness to be with my friend's mother," Alvarenga told her.

Alvarenga said he and Cordoba, who died about a month after they first became lost at sea, promised each other that whoever survived would visit the other's family and tell them what happened.

The 37-year-old fisherman's boat washed up in the Marshall Islands in February. He returned Friday to Mexico, the country where the journey began in December 2012. Some have expressed disbelief at his tale of survival, which included eating turtles, fish and birds and drifting more than 6,500 miles into the sea.

After meeting with the young fisherman's mother, Alvarenga planned to travel to Costa Azul, the place where the pair had set out.

Diaz said Ezequiel is the second son she's lost to the sea. The family lives in the small village of El Fortin, where about 500 people fish for a living and where Cordoba became a fisherman when he was 8-years-old.

She said she doesn't blame Alvarenga for her son's death, but added that she wants to hear firsthand about what her son went through.

She also said she hopes talking to Alvarenga will help her find peace and added that she wants Alvarenga's help in getting a death certificate for her son.

"It gives me a lot of tranquility, because that's what I have been wanting," Diaz said about the meeting. "I want to be clear on what happened from beginning to end."

Before the two went into a private meeting in Diaz's home, Alvarenga warned her that it wouldn't be easy to hear what happened to her son.

Alvarenga said he didn't want to tell journalists what he would share with Cordoba's mother but said the two men had suffered from hunger and that he often cried and prayed to God for a miracle.

He said he wants to save the details of his incredible voyage for an upcoming book.