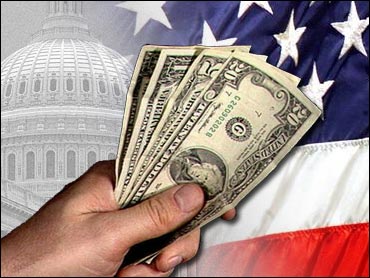 The U.S. Senate next week is expected to pass a massive spending bill that will bring federal spending per household to its highest level since the World War II — and do its part to promote the game of golf.

Published reports indicate the $820 billion measure for funding several federal agencies has increased tensions between fiscal conservatives in the Republican party and lawmakers who support the president's expansive spending on health care and defense.

It also includes millions in federal aid for a program teaching golf to kids.

According to the Boston Globe, the $820 billion bill caps a season of spending on Capitol Hill, from the $87 billion in funding for missions in Iraq and Afghanistan, to the $401 billion defense bill, to the landmark bill containing a Medicare prescription drug benefit — which will cost $400 billion over 10 years.

Watchdog groups on the left and right have concluded that spending is at a record level, the newspaper says.

The conservative Heritage Foundation says federal outlays have reached $20,000 per household, adjusted for inflation, for the first time since WWII. "It's always easy to be generous with other people's money," said Brian M. Riedl, a Heritage Foundation economist.

The liberal Center for Budget and Policy Priorities found that spending has grown twice as fast under the Bush administration than under President Clinton, reports The Globe, at a rate of 8.7 percent annually.

Part of that spending is due to different goals and different circumstances, the president's defenders say, like Mr. Bush's costly No Child Left Behind education reform program and the war on terrorism.

A White House budget spokesman says the discretionary budget — which excludes Medicare, Social Security and other entitlement programs — has risen only 4 percent a year. But that doesn't count the supplemental spending on wars in Afghanistan and Iraq.

Those concerned about the increase in spending point to the size of the deficit, which hit $374 billion in fiscal year 2003 — $216 billion more than the year before. A larger deficit can raise interest rates, choking off economic growth. And a growing federal debt load means higher interest payments.

The deficit is due partly to increased spending, but is also a result of two big tax cuts and a slower economy. Governments tend to run deficits during economic downturns, basically to try to replace stalled consumer spending with government outlays.

But "pork barrel" projects also make up part of the largess. Knight-Ridder reports the $820 billion bill on the Senate's docket includes $3 million for a Florida-based nonprofit called "First Tee" that teaches golf to kids in 38 states.

In some places, the bill puts strange restrictions on federal monies — like a $92,500 penalty to the Washington transit system for accepting advertising that supports legalizing marijuana.

The dispute between the big-spending and tight-fisted wings of the Republican party is a long-standing one. President Reagan's deficit spending divided the party along similar lines.

But according to The Hill, the dispute is getting less friendly. Quoting "well-placed sources," the publication reports that on Nov. 22, Mr. Bush hung up on a conservative Florida congressman after an argument about spending.

When GOP Rep. Tom Feeney told Mr. Bush, "I came here to cut entitlements, not grow them," sources said Mr. Bush shot back, "Me too, pal," and hung up the phone, The Hill reported.

The $820 billion may fail for reasons that have nothing to do with money. The final measure contains language that differs from what the House and Senate approved on federal broadcast ownership regulations and travel to Cuba. The wording was changed to please the White House, but it may cost crucial votes.