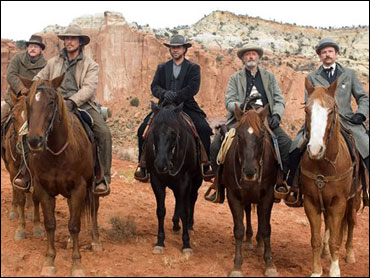 The remake from Lionsgate took in $14.1 million from Friday through Sunday according to studio estimates. While the film did not produce huge numbers, it performed well for a genre picture on a historically slow weekend.

"We ended the summer on a strong note and we're starting off the fall in typical fashion," said Paul Dergarabedian, president of box-office tracker Media By Numbers. "It wasn't a huge weekend, but it was better than the same weekend in 2006."

The performance of "3:10 to Yuma," which paired Russell Crowe and Christian Bale, thrilled Lionsgate executives, who chose this weekend to position the film for Oscar consideration.

Westerns, once a Hollywood staple, are a tough sell these days. The last critically acclaimed film of note in that genre was 1992's "Unforgiven," starring Clint Eastwood.

This fall will see two Westerns contending both for box office and awards buzz. "The Assassination of Jesse James by the Coward Robert Ford," starring Brad Pitt, opens Sept. 21.

Lionsgate picked the weekend after Labor Day to separate its film from the slew of fall Oscar contenders that will be released starting in the next few weeks. Topping the box office gives the film legitimacy with awards voters, Ortenberg said.

The weekend's other high profile opener, "Shoot 'Em Up," starring Clive Owen took in only $5.5 million, but it was good enough to finish sixth in an otherwise slow movie weekend.

The documentary about the Apollo space program, "In the Shadow of the Moon," did well in limited release. The movie, from ThinkFilm, took in $41,200 in four theaters for a per-screen average of $10,300.