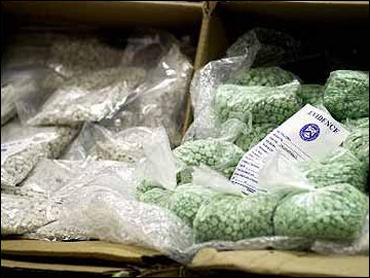 Researchers have identified a protein that may play a role in the sometimes-fatal hyperthermia that is caused by overdoses of the club drug Ecstasy.

Experiments at Ohio Northern University show mice bred without the protein called UCP-3 heat up less after they have been injected with doses of Ecstasy that kill normal rodents.

The mouse studies are the earliest steps to finding a potential therapy to help humans who develop the irreversible complication after an Ecstasy overdose.

When the body overheats enough, skeletal muscle breaks down and organs fail, leading to an agonizing death, said Ted Mills, a National Heart, Lung and Blood Institute researcher and co-author of the study appearing Thursday in the journal Nature.

"By isolating this protein we might be able to see whether in fact we can block this hyperthermia from occurring," Mills said. "Nobody's been able to do that before."

A recent United Nations report on Ecstasy use from 1995 to 2000 estimates "These people will show up at the emergency room with a fever in the 108-degree range," there has been at least a 70 percent increase in worldwide use of the recreational drug, known scientifically as MDMA for methylenedioxymethamphetamine — a chemical cousin of methamphetamine.

Ecstasy typically induces feelings of euphoria, increased energy and sexual arousal. But it also suppresses appetite, thirst and the need to sleep, and in high doses can sharply increase body temperature, leading to kidney and heart failure, and death.

"These people will show up at the emergency room with a fever in the 108-degree range," he said. "A lot of things happen when the temperature is so high, and one is that muscle cells just start popping open."

The UCP-3 protein identified in the study is found in skeletal muscle, further evidence the protein may help control the temperature increase triggered by Ecstasy, said Jon Sprague of Ohio Northern, co-author of the study.

But there are relatively few deaths from overheating considering the enormous amount of Ecstasy produced and used around the world, said David Grandy, a molecular biologist at Oregon Health & Science University not involved in the study.

"Body temperature regulation is very complex, so there's probably something else going on here," Grandy said.

Bryan Yamamoto, a Boston University pharmacologist, said the report is an important step toward pinpointing the cause of the overheating but he also suspects there are other factors involved. He noted there are similar proteins in the brain that also may play a role.

"But this research is very interesting because no one has really studied it in this way," Yamamoto said.