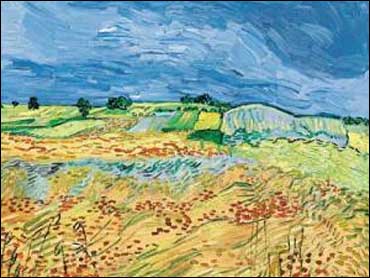 One of Vincent van Gogh's final landscapes, "The Fields," will be auctioned in New York in November, a British newspaper reported Saturday.

The painting will go display at Sotheby's auction house in London on Oct. 7 and will be sold in New York a month later with an estimated list price of $34 million, The Independent reported.

Officials at Sotheby's in London were not immediately available to confirm the report on Saturday.

Van Gogh is believed to have finished the painting, which depicts wheat fields swaying in the breeze under a blue sky, weeks before he died in a town near Paris on July 29, 1890, at the age of 37. He died two days after going to a field and shooting himself in the chest.

Many experts believe "The Fields" was the last work he completed before he died, one of several canvases featuring the landscape of Auvers-sur-Oise.

In a letter the artist wrote to his brother, Theo van Gogh, on July 10, 1890, he described having just painted what experts believe to be "The Fields," along with two other works, according to the report.

"They are vast fields of wheat under troubled skies, and I did not need to go out of my way to try to express sadness and extreme loneliness ... I almost think that these canvasses will tell you what I cannot say in words, the health and restorative forces that I see in the country," van Gogh wrote.

"As a unique work of art from the final days of the artist's life, the price will most likely be driven by passion. This is perhaps the last opportunity for a collector to acquire a landscape of this quality by Vincent van Gogh," a Sotheby's spokeswoman told The Independent.

The painting was sold by Theo van Gogh's widow to a collector in 1907 and has remained in private hands ever since.