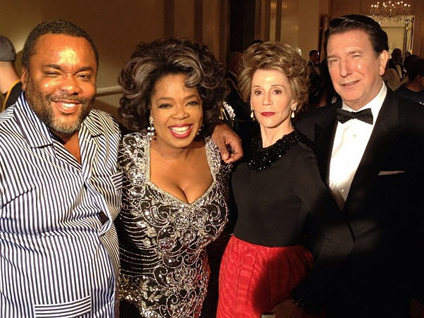 (CBS News) Oprah Winfrey has shared a few photos from the set of "The Butler" on her Twitter page, including one showing Alan Rickman and Jane Fonda in character as Ronald and Nancy Reagan.

The photo, posted Monday via Winfrey's Instagram account, shows her, Fonda and Rickman dressed for a party scene and posing with director Lee Daniels.

"Director @LeeDaniels, @JaneFonda as Nancy Reagan, Alan Rickman as Prez Reagan and me gonna be a long nite.#theBUTLER," Winfrey wrote.

She also shared a second photo Monday, showing her and co-star Lenny Kravitz:

"The Butler" is scheduled to be released next year, according to IMDB.

Tell us: What do you think of Rickman and Fonda as the Reagans?