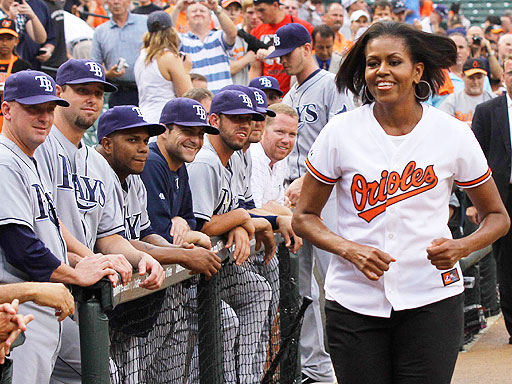 (CBS) First Lady Michelle Obama threw out the first pitch at yesterday's Baltimore Orioles-Tampa Bay Rays game at Camden Yards in Baltimore - but she was there primarily to pitch her "Let's Move!" campaign that aims to promote healthy eating and exercise habits in American children.

The event was held to publicize a new joint initiative between the Let's Move! campaign and Major League Baseball. The centerpiece of the inititiative is a series of 30 television and radio public service announcements - one for each club and eachspot featuring a different Major Leaguer.

The First Lady described the goals of the campaign, which include getting parents to make better food choices for their children, getting schools to provide healthier meals, and making sure families have access to healthy foods in their neighborhoods.

But her main focus was on exercise.

"The truth is, guys, you are supposed to be getting at least 60 minutes of active play every single day," she said. "Are you guys doing that right now? How many kids are getting 60 minutes, a whole hour, every day just to play."