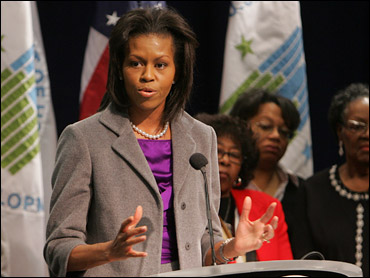 The Department of Housing and Urban Development will play a critical role in the economic recovery plan, first lady Michelle Obama said Wednesday.

She visited the department on her second stop of a listening tour through the federal bureaucracy to thank employees for their work.

"Every day you carry out the nation's work without any fanfare, often times, attention, acknowledgment," Mrs. Obama told at least 600 enthusiastic HUD staffers. "You do it and get the job done, because it's the right thing to do."

She added that they would be asked to contribute even more to stem the tide of foreclosures.

"You and your colleagues are going to be asked to do even more," she said, adding that their work was critical to keeping people in their homes.

Home ownership is one of the building blocks of strong communities, the first lady told cheering employees. It forms the foundation for school and family life.

"Investing in the community that you live in first and foremost is critical," she said. "And for the people here in this agency, we are now your neighbors."

Hundreds of HUD employees lined up for more than an hour before the first lady was due to speak. Many held aloft cameras and cell phones to take pictures of her entrance.

One staffer interrupted her opening remarks shouting, "We love you!"