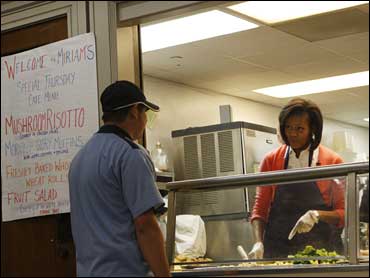 (AP)
Visitors to a Washington D.C. soup kitchen today were treated to the type of meal that wouldn't be out of place at a trendy restaurant – mushroom risotto, steamed broccoli, apple-carrot muffins, and fresh fruit salad.

The service wasn't shabby either: Michelle Obama stepped into the role of lunch lady, dazzling the crowd of homeless men and women as she doled out food.

Mrs. Obama's visit was not announced in advance and came as a complete surprise to patrons.

The staff at Miriam's Kitchen twittered throughout the first lady's visit.

One of their tweets stated: "She is beautiful even in rubber gloves."

Another said: "She is spending time with all our guests. Awesome."

Obama said that her purpose in coming was "to listen and learn and scoop some risotto," according to a pool report.

(AP)
Obama visited Miriam's Kitchen to spotlight the important role that food banks and soup kitchens play around the country. Demand for their services is expected to increase because of the economic downturn.

After serving lunch to about 50 homeless men and women, Mrs. Obama made a few brief remarks in which she urged other Americans to follow her example and to help out in their local communities, according to a pool report.

The White House also got into the act. Eight crates of fruit were donated by White House employees, according to Scott Schenkelberg, executive director of Miriam's Kitchen. He said that was enough for almost two weeks of meals.

Miriam's Kitchen is located seven blocks from the White House. It is a non-profit organization that provides food and case management services to the homeless. Homeless clients are referred to as "guests" by staff and volunteers "because it's all about dignity," Sara Gibson, director of development for the privately funded organization, told pool reporters.

The visit was part of an ongoing effort by Mrs. Obama to connect with the Washington community and to reach out to various city organizations, according to her office.