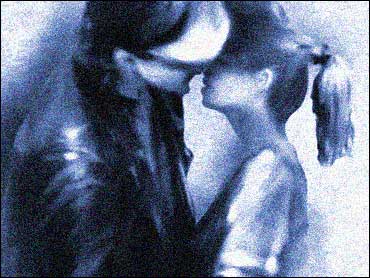 The first kiss can make or break a relationship — all in one moment. Hollywood has shown some unforgettable examples over the decades, but in real life, they can be pretty hard to live up to.

The Saturday Early Show takes a look at some of the big screen's most memorable first kisses and turns to the experts for some extra insight. Ian Kerner, a sex therapist, and Nicole Beland from Men's Health magazine explain why that first lip lock is so important — and how to get it right.

Why do men get so nervous when planning for the first kiss?

Kerner: It's a lot of anxiety to make the first move. The first kiss is the boundary between acceptance and rejection, and we're terribly afraid of the latter. It's often much easier and less fraught to get from the first kiss to sex than to get from ground zero to the first kiss. Men love women who make it easy, or even go for the first kiss themselves. It's all about the fear of rejection. In an age of "Sex and the City," women should be translating all that attitude into action and taking the lead more often in making the first move.

Beland: I think guys feel a lot of pressure to make it happen and make it great. They're usually the ones to make the first move. We women sort of cozy up next to a guy and make sure he has an open path to our lips, and then just wait for him to plant one on us.

Should you get it out of the way or wait for the perfect moment?

Kerner: The Woody Allen "Annie Hall" technique worked well on film, but I know men who have tried to get it out of the way with disastrous results, including butting heads really badly. There will never be a perfect moment, although the end of the date is usually the most conventional time. But I think it's important to let the first kiss occur spontaneously as a result of the time and place and mood.

Beland: Waiting for the perfect moment usually just makes for an even more awkward kiss. There's something to be said for just doing it! But it should really come toward the end of the date, since post-kiss conversation can feel a little awkward. The best moment to kiss someone is right before you're going to say goodnight. At that point, don't hesitate, just go right in for the kiss. It's better to have an awkward first kiss at the end of a first date than no first kiss. Women definitely think it's odd if a guy doesn't at least give them a peck. They take it to mean that he isn't interested.

Should you ask permission?

Kerner: No, no, no! This only increases the anxiety and allows for brain-processing to interfere with the moment. If you're really connected, it will be spontaneous, natural and mutual. Asking permission is a way of trying to avoid the risk. But it's like sky-diving. You have to jump and the more talking you do when you're standing at the edge, the more nervous you will get.

Beland: No, that's a little too polite. We want to feel like you're attracted to us passionately, and passion requires a hint of recklessness

What makes a first kiss so special?

Kerner: It signals sexual acceptance; it's usually the result of a lot of sexual anticipation; and it's the first fresh connection of sensitive nerve endings.

Beland: It's the first thing you're doing that's off limits to everyone else in your life. You can hug anyone, kiss anyone on the cheek, no big deal. But kissing on the lips? That's a privileged action. It means you're hot for each other!

Does a first kiss set the tone for the relationship?

Kerner: Yes, in the sense that in our age of casual sex, the first kiss has become devalued and is no longer always special. A first kiss can be the difference between a casual hookup or the first connection between soul mates, so in that sense it does set the tone for the relationship, in that behind every kiss is an intention and, hopefully, those intentions are mutual.

Beland: I think it can reveal a lot about the two people involved. Who's bolder, who's more reserved. Who's more sensitive. Who's more adaptable. A person's mouth can tell you things about them that they don't even know.

Why do women make such a big deal out of the first kiss?

Kerner: Do they? How so? This is what guys want to know. Men make a big deal out of it, too. Seriously, I think a kiss reveals a lot about the kisser; you either feel the connection or you don't, so very often it tells you about the chemistry connection. The body often knows what the mind refuses to admit, so you need to pay attention to the kiss and what it's telling you about the chemistry.

Are first kisses really as incredible as the movies make them out to be?

Kerner First kisses can be incredible, but sometimes they're not. And Hollywood sometimes gives us too high an expectation. Not every kiss is Bogie and Bergman. And often kisses go awry. One guy I know was totally into a woman and was savoring the first kiss and then her breath smelled like creamed corn and he could never kiss her again.

Beland: Is anything as incredible as the movies make them out to be? Maybe they're not as perfect, not as pretty (no one slobbers on each other in the movies) but in real life they're always hotter because the emotions are real.

Should a first kiss happen at the end of a first date?

Kerner: Not necessarily. It's a fine line between expressing interest and pushing too far. When a guy just wants to hook up with a woman, he'll go for the first kiss and lots more on the first date. If he thinks the person might be a future "mate," he's likely to be more respectful and take it more slowly. In my personal case, I really liked my wife on the first date, and I kissed her on the cheek goodnight. She didn't know what to think, whether I liked her or not. Maybe I should have gone for a more tender first kiss, on the other hand we're happily married. My first kiss was unreadable, but the second kiss was a true first kiss.

Beland: Women will think you're not into them if you don't go for the smooch before the night is over. Even a peck is better than nothing.

If the first kiss is awful is the relationship doomed?

Kerner: Not at all. The truth is, sometimes first kisses are nervous or awkward, or sometimes the kisser grows on us over time. As relationships deepen and intensify, the kissing should get better. Like they sang in "A Chorus Line," sometimes you have to "kiss today goodbye and point me toward tomorrow."

Beland: No, though it makes you wonder if you just don't click physically. Some couples have to work to become physically in synch, other couples just click right away. And of course it's nicer to click than smack noses.