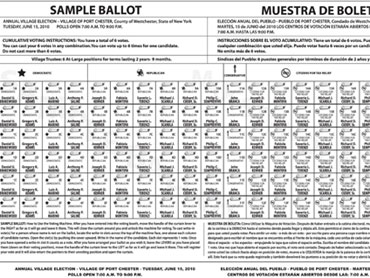 An unusual election in a New York City suburb, in which voters could cast six ballots for one candidate, apparently resulted Wednesday in the first Hispanic elected to the village Board of Trustees.

Luis Marino, a school district maintenance director, was in fourth place among 13 candidates for six trustee positions in the final but unofficial vote count, said Aldo Vitagliano, a spokesman for the village of Port Chester.

Marino, a Democrat, had 1,962 votes, well back of leader Bart Didden, an independent, who had 2,576. But Marino was well ahead of the seventh-place candidate, who had 1,272. Only 28 affidavit ballots remained to be counted, Vitagliano said.

"I am very happy, and I hope to do my best," he said. "I was happy to do whatever the people decided."

The court-imposed election was held after a federal judge ruled that Port Chester's conventional at-large trustee elections violated the Voting Rights Act. Although the village of about 30,000 residents is nearly half Hispanic, no Latino had ever been elected to any of the six trustee seats. Most voters were white, and white candidates always won.

The success of one of the two Hispanics on the ballot could lead to wider use of the unusual voting system, called cumulative voting, especially as a remedy for discrimination. Port Chester was the first municipality in New York to use it, said Amy Ngai, a director at FairVote, a nonprofit election research and reform group that was hired to consult in Port Chester.

In cumulative voting, residents get multiple votes to apportion as they wish among the candidates. Experts said the system allows a political minority to gain representation if it organizes and focuses its voting strength on specific candidates.
First Hispanic Trustee Elected in Unusual NY Election
Cumulative voting has been used to elect the school board in Amarillo, Texas, the county commission in Chilton County, Ala., and the City Council in Peoria, Ill.

The judge also ordered Port Chester to implement in-person early voting, allowing residents to show up on any of five days before Tuesday to cast ballots. That, too, is a first in New York, Ngai said.

Arthur Furano, an 80-year-old lifelong resident of Port Chester, voted Thursday and gave all six of his votes to one candidate.

His wife, Gloria Furano, gave one vote each to six candidates.

On Tuesday, Candida Sandoval voted at the Don Bosco Center, where a soup kitchen and day laborer hiring center added to the activity, and where federal observers watched the voting from a table in the corner.

"I hope that if Hispanics get in, they do something for all the Hispanic people," Sandoval said in Spanish. "I don't know, but I hope so."

Campaigning was generally low-key, and the unusual election itself was less of an issue than housing density and taxes.

The village held 12 forums, six each in English and Spanish, to let voters know about the new system and to practice voting. It also produced bright yellow T-shirts, tote bags and lawn signs declaring "Your voice, your vote, your village," all part of the education program mandated in the government agreement. Announcements were made on cable TV in each language and reminders were sent home in schoolkids' backpacks.

All the materials had to be approved in advance, in English and Spanish versions, by the Department of Justice.

Aaron Conetta said the voter education effort was so thorough he found voting easier than usual.

"It was very different but actually quite simple," he said. "No problem."