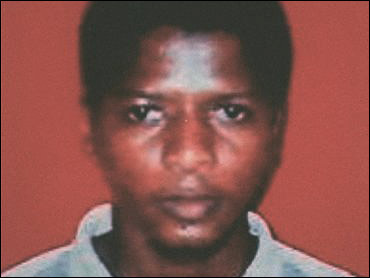 U.S. authorities have brought the first Guantanamo Bay detainee to the United States, flying him into New York to face trial for bombing U.S. embassies in Tanzania and Kenya, the Justice Department said Tuesday.

The department said Ahmed Ghailani arrived early Tuesday. U.S. Marshals took custody of Ghailani from his military jailers and brought him to the Metropolitan Correctional Center in New York. Ghailani is scheduled to appear in Manhattan federal court later Tuesday.

According to lawyers, Ghailani wants to use the military's defense team.

"With his appearance in federal court today, Ahmed Ghailani is being held accountable for his alleged role in the bombing of U.S. Embassies in Tanzania and Kenya and the murder of 224 people," Attorney General Eric Holder said in a news release. "The Justice Department has a long history of securely detaining and successfully prosecuting terror suspects through the criminal justice system, and we will bring that experience to bear in seeking justice in this case."

Ghailani is set to appear in court before Judge Loretta Preska at 4 p.m. EDT.

Ghailani's trial will be an important test case for President Barack Obama's plan to close the detention center at Guantanamo in seven months and bring some of the suspects to trial.

The move was criticized by House Minority Leader John Boehner, who called it "the first step in the Democrats' plan to import terrorists into America."

Ghailani was indicted in 1998 for the al Qaeda bombings of U.S. embassies in Kenya and Tanzania, attacks which killed more than 224 people, including 12 Americans.

U.S. officials charge Ghailani began his terrorist career on a bicycle delivering bomb parts and rose through the al Qaeda ranks to become a bodyguard to Osama bin Laden.

Ghailani, a Tanzanian, was in his twenties when prosecutors say he helped terrorists build one of the bombs that destroyed U.S. embassies in East Africa in 1998.

He left Africa just before the bombings, according to investigators.

After the Aug. 7, 1998, bombings at U.S. embassies in Nairobi and Dar es Salaam, Tanzania, Ghailani worked for al Qaeda as a document forger, trainer at a terror camp and bodyguard to bin Laden, according to military prosecutors.

He was categorized as a high-value detainee by U.S. authorities after he was captured in Pakistan in 2004 and was transferred to the detention center at the U.S. naval base in Cuba two years later.

Since his capture, Ghailani has denied knowing that the TNT and oxygen tanks he delivered would be used to make a bomb. He also denied buying a vehicle used in one of the attacks, saying he could not drive.

Now, the Obama administration is trying to put him into the U.S. criminal justice system, despite claims by Republican critics that doing so would endanger American lives. Some lawmakers have opposed bringing any Guantanamo detainees to the U.S. for trial, even in heavily guarded settings.

Last month, President Obama said that preventing Ghailani from coming to U.S. soil "would prevent his trial and conviction. And after over a decade, it is time to finally see that justice is served, and that is what we intend to do."

Relatives of those killed in the embassy attacks have supported the decision to bring Ghailani to the U.S. for trial. Many of those relatives say that since the 2001 terror attacks, the earlier victims of al Qaeda have been forgotten.

Yet the president faces pressure from across the political spectrum on his plan to close the detention center. Democrats have said they want to see Mr. Obama's plan for closing the base before approving money to finance it, and Republicans are fighting to keep Guantanamo open.

The decision to try Ghailani in New York also revives a long-dormant case charging bin Laden and top al Qaeda leadership with plotting the embassy attacks that killed more than 200 people and injured thousands, including many who were blinded by shards of flying glass. The attacks prompted then-President Bill Clinton to launch cruise missile attacks two weeks later on bin Laden's Afghan camps.

Four other men have been tried and convicted in the New York courthouse for their roles in the embassy attacks. All were sentenced to life in prison.