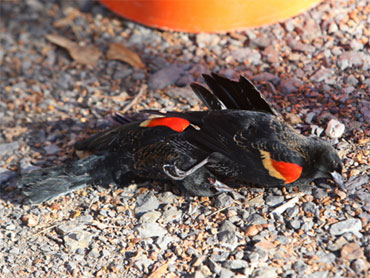 LITTLE ROCK, Ark. - Wildlife experts are trying to solve a mystery that evoked images of the apocalypse: Why did more than 3,000 red-winged blackbirds tumble from the Arkansas sky shortly before midnight on New Year's Eve?

Scientists are investigating whether bad weather, fireworks or poison might have forced the birds out of the sky, or if a disoriented bird simply led the flock into the ground.

"We have a lot more questions," said Karen Rowe, an ornithologist with the Arkansas Game and Fish Commission. She said there are documented cases of birds becoming confused and plunging to earth.

Separately, some 100,000 fish died last week in the Arkansas River in the northwestern section of the state, the New York Daily News reports.

The drum fish were discovered Thursday across more than 20 miles of the river, fish and game officials announced Sunday.

Officials said they don't know what killed the fish, but that contaminated water isn't likely to be the cause because only one species was affected.

The fish kill took place only 125 miles from the site of the mysterious falling birds.

The director of Cornell University's ornithology lab in Ithaca, N.Y., said the most likely suspect is violent weather. It's probable that thousands of birds were asleep, roosting in a single tree, when a "washing machine-type thunderstorm" sucked them up into the air, disoriented them, and even fatally soaked and chilled them.

"Bad weather can occasionally catch flocks off guard, blow them off a roost, and they get hurled up suddenly into this thundercloud," lab director John Fitzpatrick said.

Kevin McGowan, another Cornell ornithologist, called the incident "very unusual" and "almost unprecedented" in an interview with CBS News.

McGowan said that the birds don't normally fly at night and can't see well in the dark.

"Something happened; they should have been asleep in their roost," he said. "Wherever they were, they ran into something."

McGowan doubted the lightning explanation but said that fireworks were plausible. He said similar events aren't seen on the Fourth of July because the birds are mating at that time of year and not found in large congregations.

Rough weather had hit the state earlier Friday, but the worst of it was already well east of Beebe by the time the birds started falling, said Chris Buonanno, a forecaster with the National Weather Service in North Little Rock.

If weather was the cause, the birds could have died in several ways, Fitzpatrick said. They could easily become disoriented - with no lights to tell them up and down - and smack into the ground. Or they could have died from exposure.

The birds' feathers keep them at a toasty 103 degrees, but "once that coat gets unnaturally wet, it's only a matter of minutes before they're done for," Fitzpatrick said.

Regardless of how they died, the birds will not be missed. Large blackbird roosts like one at Beebe can have thousands of birds that leave ankle- to knee-deep piles of droppings in places.

Nearly a decade ago, state wildlife officials fired blanks from shotguns and cannons to move a roost of thousands of blackbirds from Beebe. In recent years, many of the migratory birds returned.

Red-winged blackbirds are the among North America's most abundant birds, with somewhere between 100 million and 200 million nationwide, Fitzpatrick said. Rowe put the number of dead in Beebe at "easily 3,000."

Bird carcasses were shipped to the Arkansas Livestock and Poultry Commission and the National Wildlife Health Center in Madison, Wis. Researchers in Georgia also asked for a set of the dead birds. Test results could be back in a week.

Rowe said many of the birds suffered injuries from striking the ground, but it was not clear whether they were alive when they hit. A few grackles and a couple of starlings were also among the dead. Those species roost with blackbirds, particularly in winter.

Tens of thousands of blackbirds can roost in a single tree. And they do not see well at night, when they usually sleep, Fitzpatrick said.

Earlier Friday, a tornado killed three people in Cincinnati, Ark., about 150 miles away. Then a couple hours before the birds died, thunderstorms also passed through parts of central Arkansas. Lightning could have killed the birds directly or startled them to the point that they became confused. Hail also has been known to knock birds from the sky.

In 2001, lightning killed about 20 mallards at Hot Springs, and a flock of dead pelicans was found in the woods about 10 years ago, Rowe said. Lab tests showed that they, too, had been hit by lighting.

Back in 1973, hail knocked birds from the sky at Stuttgart, Ark., on the day before hunting season. Some of the birds were caught in a violent storm's updrafts and became encased in ice before falling from the sky.

Rowe and Fitzpatrick said poisoning was possible but unlikely. Rowe said birds of prey and other animals, including dogs and cats, ate several of the dead birds and suffered no ill effects.

"Every dog and cat in the neighborhood that night was able to get a fresh snack that night," Rowe said.