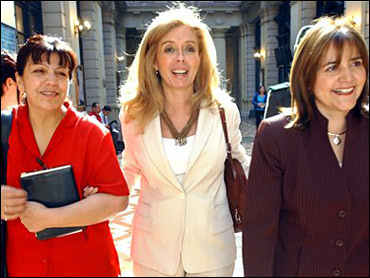 A 48-year-old woman became the first person in Chilean history to file for divorce Thursday, ushering in a new era for this heavily Roman Catholic country that had been the last in South America with no divorce law.

The justice minister called the new law a historic step, but Maria Victoria Torres said it was far more personal — "a window that opens to look at a new life with dignity, without fear."

As the Santiago Court of Appeals opened its doors Thursday, Torres, who said her husband abused her, was first in line.

Torres, a beauty parlor assistant who has been married for 35 years, based her request for divorce on what she called "25 years of continued violence" by her husband, from whom she has been separated for months. The couple has two grown children.

"This law will allow me to recover my dignity and my freedom in a legitimate manner," Torres said.

Others filed for divorce at courts around the country, although the avalanche of petitions many predicted did not occur.

Chile's Congress passed the law six months ago, defying the fierce opposition of the Catholic Church, which waged a strong campaign against it that included television ads.

About 87 percent of Chileans consider themselves Catholic.

The country was among the last in the world without a divorce law, and the last in South America after Paraguay allowed divorce in the 1980s.

Other countries that still do not allow divorce include Malta and the Philippines.

"This is a historic day for our nation," Justice Minister Luis Bates said, while also urging Chileans to be cautious before seeking a divorce.

Until now, Chilean couples with failing marriages were forced to obtain annulments, often resorting to subterfuge to meet the criteria.

It was common, for example, for one of the partners to declare before a court that their marriage was illegal because one spouse reported a false address at the time of the wedding. Some 6,000 annulments were approved every year in the country of 15.5 million.

An annulment under the old system cost $670 — steep in a nation where the minimum wage is about $190 a month. A divorce will cost roughly half as much, attorneys say, and will offer better legal resolution of property disputes.

The new law allows couples to get a divorce only after living apart for at least one year, if both spouses agree, and three years if only one party agrees.

The waiting period can be avoided if one spouse proves there has been violations of marital duties by a partner, such as domestic violence, homosexuality, prostitution, drug addiction or a criminal conviction.

The law also requires couples seeking a divorce to undergo counseling for at least 60 days.

The law took nine years to make its way through Congress. The final text replaced a law on marriage that had been in effect since 1884 and had no provision for divorce.