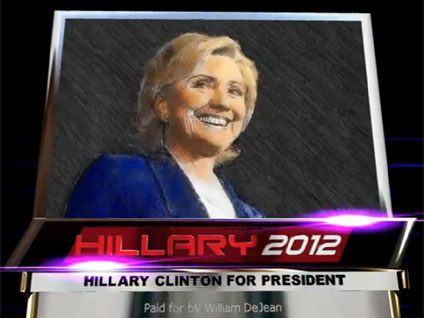 There's plenty of speculation over who will run against President Obama in 2012 -- but few expect it to be anyone from his administration.

Nevertheless, the first television ad for the 2012 election supports Secretary of State Hillary Clinton for president.

A Chicago dentist named William DeJean spent $5,000 to create the ad, which is currently airing in New Orleans, CNN reports. DeJean plans to run the ad in Washington, New York and Los Angeles and possibly Houston as well.

"I'm a dentist and I don't think this country is headed in the right direction," he told CNN. He said Clinton is the "most qualified" to be president. DeJean also reportedly paid for ads in support of Clinton during her 2008 presidential bid.

The Clinton ad features somber but uplifting music while the screen reads, "She has more experience working in and with the White House than most living presidents... She is one of the most admired women in our nation's history... Let's make sure the president we should have elected in 2008 will be on the ballot in 2012."

It ends with the tag line, "Start now. Where there's a Hill, there's a way."

Clinton has said unequivocally in previous interviews that she has no intention to run for president again.