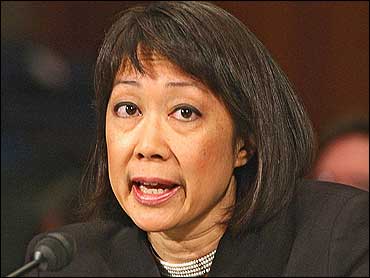 When the Senate Judiciary Committee served a document subpoena upon the Justice Department on Wednesday for more of Karl Rove's e-mails relating to the U.S. Attorney scandal, it was a strong sign that this springtime drama is likely to last well into summer and beyond.

And when news broke later in the day that former Justice Department official Monica Goodling might have broken the law by hiring federal employees based upon their political parties, you can bet that a great many legal beagles started drooling over their computer screens as they tried to comprehend the impact the news would have upon her still-far-off testimony before the committee.

But the truest and most poignant words of the day came from some of the very people at the center of the controversy. The House Judiciary Committee released the written answers from six of the eight fired federal prosecutors. They ought to be required reading for anyone interested in truly comprehending the scope of the White House's misfeasance in this matter. For only in their reading do you really comprehend just how these sharp and ambitious these public servants were before they were canned — just how much they resemble precisely the sort of government employees we need more of, not less, in this country.

Republican appointees all, some of the six fired U.S. attorneys answered their questions tersely. Others were more expansive. Some clearly still are bitter over how and why they were fired; some are angry less at what has transpired since. All, you easily could conclude from their responses, are more loyal and dedicated and true to the ideal of good governance and the dispassionate rule of law than are the cynical lot of hacks who conspired to fire them and then put their plot into action. When you read their answers carefully, you realize that the bad guys beat the good guys here (at least to this point) — to the detriment of us all.

You also realize in reading those responses that the explanation given by the White House and Justice Department in defending their position — that these people all served "at the pleasure of the president" — doesn't answer or even address the more fundamental and pressing question: Why it is in the best interests of the country to replace highly competent and dedicated federal prosecutors with those arguably less so? In other words, even if these people are political appointees, why is it good governance to have replaced them when they were by any reasonable measure doing a really good job?

Take Carol C. Lam, the U.S. attorney in San Diego before she was fired as part of this purge. In 2007 alone, she was the San Diego County Bar Association Outstanding Lawyer of the Year, one of the Los Angeles Daily Journal's Top 75 Women Litigators, and a recipient of the U.S. Health and Human Services Inspector General's Award. In her responses, she explained the work her office did to help drop crime in San Diego to "its lowest point in 25 years," as well as the work she coordinated to help thwart gun crimes. When asked if she "was ever told by anyone in the Justice Department that your job performance was inadequate in any respect prior to your being asked to resign," she answered no.

Take Daniel Bogden, the U.S. attorney for Nevada until he was fired. He told the committee that when the time came, a high-ranking Justice Department official "explained to me words to the effect that the administration had a short two-year window of opportunity to put an individual into my United States Attorney's position in order to have the experience of serving as United States Attorney — have that title and experience on his or her resume so the Republican Party would have more future candidates for the federal bench and future political positions." Leave aside the "pleasure of the president" acorn: do you think that's a valid reason for firing a public servant who is otherwise doing a good job?

In fact, Bogden, in one of his responses, perfectly explained why this whole mess is so disturbing to rank-and-file federal lawyers. "Although each United States Attorney has a set of national priorities that need to be followed," he wrote, "in order to maximize effectiveness, [he] needs independence to establish the priorities for that particular district based upon his or her knowledge of that district, the office, its law enforcement partners and all other issues confronting the district. That independent judgment and ability to set appropriate priorities is critical.

"No one knows better what is going on in a district than the United States Attorney — the needs of that district and its priorities," Bogden wrote. "As to independent judgment with regards to particular prosecutions, although United States Attorneys are political appointees, as are federal judges, once in office they must have an overriding responsibility to justice in individual cases and need to pursue justice without fear of retribution."

Read his other responses and then tell me that he isn't precisely the sort of man you want as the face of the Justice Department.

Two of the other fired federal prosecutors, Paul K. Charlton and John McKay, disclosed details about the way in which they feel they were threatened to stay quiet about their dismissals by a Justice Department official, Michael J. Elston, the chief of staff for Deputy Attorney General Paul J. McNulty. Which side do you think our government and our president ought to be on? The side of the threatened or the side of the guy who threatens? Which side deserves to continue to serve at the president's "pleasure?" Elston still has his job. What sort of message does that send?

The moral of the story, so far, is that the people who should have been fired did the firing and the people who deserved to be able to continue to serve us all got the shaft. If that isn't a recipe for bad governance, if that isn't a "displeasing result," I don't know what is.