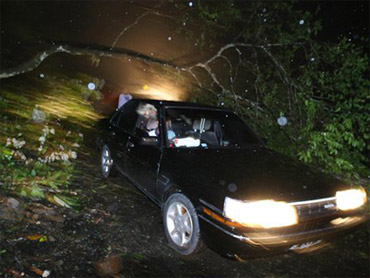 Bridgestone Firestone, the North American unit of Japan's Bridgestone Corp., and Ford reached a settlement that will help cover the costs of the automaker's 2001 tire-replacement program, which followed the tire recall, said Saul Solomon, vice president and general counsel of Nashville-based Bridgestone Firestone.

"We view this $240 million as effectively settling all disputes between the two companies. We've resolved our differences in an amicable manner," said Paul Wood, spokesman for Ford.

At least 271 people were reported killed and hundreds more injured in accidents involving Firestone ATX and AT tires, and the maker recalled 6.5 million of them.

Bridgestone has spent about $440 million on recall-related costs, according to Chris Karbowiak, vice president of public affairs of Bridgestone Americas.

Wood said Ford's tire replacement efforts have cost the company "significantly less" than the up to $3 billion Ford had previously reported.

Bridgestone has blamed the accidents on defects in some Ford vehicles, while Ford maintains the tires were entirely at fault.

Bridgestone said it severed business ties with Ford that had lasted nearly half a century in May 2001. Ford then began replacing more than 10 million Firestone tires free of charge for its own customers, the automaker said.

"It's footnote," Healy said. "I think it's a minor help to Ford's cash position. I suppose anytime you get about a quarter of a billion dollars it's welcome, but it doesn't change the big picture."

Some lawsuits against Ford and Bridgestone are still pending, though officials at both companies were unable to specify the exact number.

Tab Turner, a Little Rock, Ark.-based lawyer who has assisted in a class-action lawsuit and represented about 250 individual plaintiffs in suits against the companies, said about a dozen class-action lawsuits and between 1,000-1,500 individual cases have been filed related to the tires or Ford vehicles or both since the 2000 recall.

"Those lawsuits have largely disappeared," Turner said. "This settlement will not have any impact on the individual lawsuits. This is just a pure business dispute between the manufacturers of the vehicle and one of its suppliers."