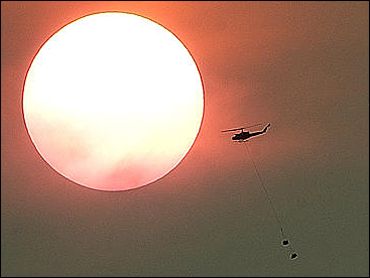 Although fire officials were hopeful they could save a $200 million mountaintop observatory, two small communities remained at risk as flames from a pair of lighting-sparked wildfires creept closer.

One fire was less than a mile from the observatory by Tuesday night and about 1½ miles from Turkey Flat, a community of about 74 cabins where firefighters focused much of their efforts.

The fire and a blaze on another part of the mountain in southeastern Arizona had earlier prompted evacuation of the Mount Graham International Observatory and about 90 cabins in Turkey Flat and another community.

"There's a good chance we will lose structures," said Dan Oltrogge, an incident commander for the team fighting the fire. "But we're doing everything we can to keep the fire out of there."

Officials said the blazes had charred an estimated 20,700 acres combined, with the fire closest to Turkey Flat accounting for 12,200 acres. Both were 10 percent contained.

At Turkey Flat, fire crews wrapped sheets of aluminum around cabins to protect them from the heat of the approaching blaze. Firefighters also removed heavy vegetation and drenched homes with water.

Gherald Hoopes, who owns a home in Turkey Flat, said he was "kind of resolved" that the fire would reach the community by Wednesday.

"It just has one canyon and then it will run right up to the cabin," Hoopes said. "It would be a significant loss... We really wouldn't be able to replace it."

Home to some of the world's most powerful telescopes, the observatory encompasses eight buildings and 8½ acres of pine forest on Mount Graham's 10,470-foot Emerald Peak. It is surrounded by a 200-foot-wide clearing and the site's metal structures should withstand embers from the blaze.

But even if the building doesn't burn, officials said smoke and heat could damage the delicate instruments inside.

The observatory, an extension of the University of Arizona, has two operating telescopes and the $120 million Large Binocular Telescope, which is under construction.

When fully operational next year, the Large Binocular Telescope will be the world's most advanced optical telescope, capable of producing images nearly 10 times sharper than those from the Hubble Space Telescope.

Elsewhere in Arizona, a fire had blackened 90,500 acres of the Tonto National Forest near Payson, a town of some 14,000 people. The blaze was not threatening any homes or communities.

"We have been able to turn on the corner on that area of the fire that was closest to Payson, and they are now pretty well safe," said Carrie Templin of the National Forest Service.

Two other towns, Pine and Strawberry, are ten miles north of Payson.

"Their risk is very slight at this time, but they are not 100 percent out of the woods yet," Templin told CBS Radio News.

This "Willow" fire is only about a fifth contained, she said.

"Only 22 percent of this fire has got a line around it, which means we have a lot of firefighting ahead of us unless we get monsoon moisture, but we've slowly-but-surely making progress," said Templin.

High winds could blow one of the fire, which flared to 3,200 acres Tuesday about 3 miles east of the lake, toward houses and other structures, said Ray Steiger, a spokesman with the incident management team. Officials recommended evacuation to residents of about 45 homes.

In Alaska, an evacuation order remained in effect Tuesday for 277 homes threatened by a 307,000-acre fire north of Fairbanks.

Cool weather helped firefighters on the lines of a 2,960-acre wildfire Tuesday in Colorado as helicopters worked to douse hot spots in the interior of the fire.