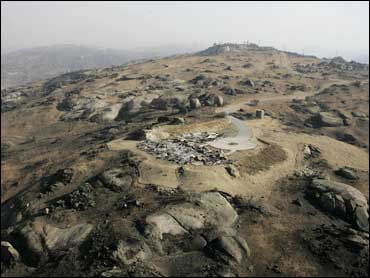 The wind-driven infernos that are scarring vast swaths of Southern California's landscape may leave more than just a temporary path of destruction when they are finally extinguished.

The wildfires could leave a legacy of environmental devastation that will be evident for years to come, scientists say, especially in areas that have been scorched several times recently. Some of the damage may never be reversed.

Invasive weeds and grasses could crowd out native plants and shrubs, accelerating erosion and leading to more frequent wildfires.

Pine stands that have been a signature feature of many mountainside communities could become just a memory in places.

Small birds, rabbits and other animals dependent on California's rapidly disappearing native vegetation will struggle to maintain a foothold, while some endangered species will find themselves locked into increasingly imperiled islands of refuge.

Scientists say it will take years to know the extent of the long-term damage. They also say that not all the news may be grim: Nature has a way of providing pleasant surprises.

The fires burning across San Diego County are covering much of the same territory stripped during the 2003 Cedar Fire, an area that had started the slow process of growing back.

After this week's blazes, those young, native shrubs may not come back because they are not mature enough to have dropped seeds. That could allow more flammable invasive plants to take root, experts said.

"If you want to get rid of native shrubland, this is how you do it," said Rick Halsey with the California Chaparral Institute, as he watched a hillside burn near his home in Escondido. "The problem now is you get a habitat covered by exotic weeds, and that can regenerate every single year and carry a fire every single year."

By midweek, the fires had blackened about 426,000 acres (172,400 hectares) from Ventura County to the Mexican border, feeding on bone-dry vegetation that included coastal shrubs, tree-covered foothills and the alpine stands around Lake Arrowhead.

But wildfires are on the rise, in both frequency and intensity, in part because of hotter, drier conditions.

If a fire recurs in an area within five to 10 years, the hardy native shrubs may not get the chance to mature and create seeds. Exotic weed-like grasses that germinate quickly can fill in areas faster than natives can recover.

Because those grasses have shallower roots, the potential for erosion and mudslides increases.

"It's like a fighter that gets knocked down and then gets knocked down again - he's less likely to get up," said Wayne Spencer, a biologist with the Conservation Biology Institute in San Diego, referring to battered native plants.

Researchers in San Diego have been conducting long-term studies on the 2003 Cedar Fire, which burned more than 273,000 acres (110,480 hectares) and was historic for its size and intensity.

Based on their findings, Spencer and other scientists have made general predictions about how the latest fires could affect the state's ecology.

"There's no doubt that it's going to be converted to a weedier, less pretty, fewer species, simpler environment than the one we inherited when we moved here," Spencer said.

Scientists urge restoration projects so the forests will not be lost.

The loss of native vegetation also can hurt animals dependent on that habitat, such as the California thrasher and brush rabbit. Others that can thrive in a barren landscape, such as the rock wren, could benefit.

In San Diego County, home to numerous threatened and endangered species, the wildfires present a double tragedy. Suburban development has limited the range of many rare species of lizards and snakes to just a few, small reserves. When those burn, the species' survival is jeopardized.