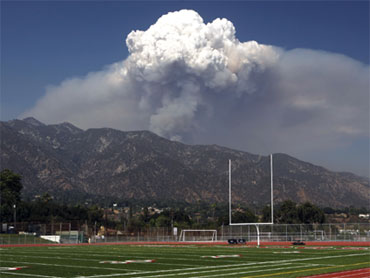 More smoke was expected to rise out of the Angeles National Forest Monday as firefighters burned back heavy brush to contain the deadly arson fire in mountains north of Los Angeles.

The blaze was 56 percent contained Monday morning, but Forest Service spokesman Nathan Judy said residents of Pasadena and other foothill cities near the San Gabriel Mountains would see firefighters still hard at work.

"If people see crews working around their neighborhoods without any smoke or flames near by, that's contingency work. It's not because fire's coming that way," Judy said. "If temperatures go up, if humidity goes down again and the winds pick up, we want to be prepared for whatever happens."

Firefighters have to build a 65-mile long fireline across rough and rugged terrain to safely contain the blaze, CBS News station KCBS in Los Angeles reported.

More coverage of the California wildfires from KCBS

Monday's temperatures are expected to peak in the mid-80s, giving firefighters a much needed break from last week's triple-digits.

Fire officials said the blaze has blackened 157,220 acres, or 246 square miles, of forest as it burns deeper into the wilderness in its thirteenth day.

Crews were hoping for gentle winds that will allow them to conduct back burns to remove fuels and create a buffer between the active flames on the eastern edge and the San Gabriels, the steepest mountain range in Southern California.

"Even the mountain goats won't climb in there because it's so steep and rugged," Judy said.

What's left of the fire wasn't burning aggressively and was only feeding off of leaf litter on the ground and old growth and dead timber, he said.

About 4,600 firefighters soldiered on while investigators analyzed clues found at a burnt hillside near the Angeles Crest Highway, where the fire started. Officials have said the cause of the fire was arson, but have not released any findings.

Because of the deaths of the two firefighters, Los Angeles County authorities opened a homicide investigation last week. Los Angeles County firefighters Tedmund Hall and Arnaldo Quinones were killed Aug. 30 while seeking an escape route for their inmate fire crew after flames overran their camp on Mount Gleason.

The temporary city that sprang up to house, bathe and feed firefighters will be relocated from at a large park in the Lakeview Terrace neighborhood of Los Angeles to another park near Irwindale to the east, closer to the active fire, fire officials said Monday.